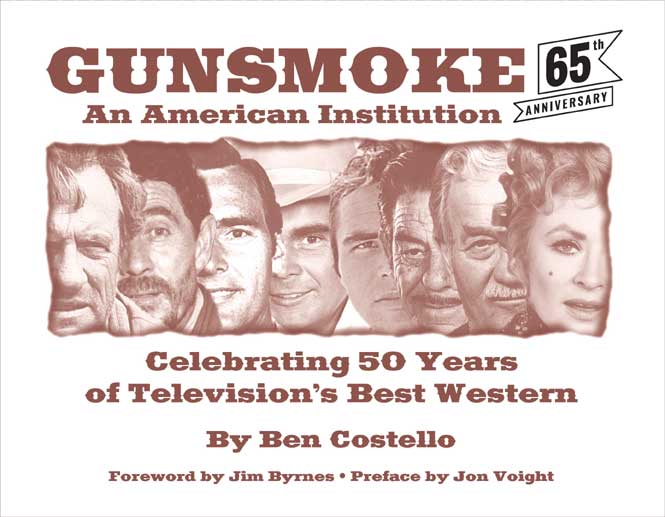 Hundreds of pages have been written and thousands of hours of screen-time dedicated to the settling of the wild American West. From wild and wicked gunslinging outlaws to stagecoaches, sheriffs, and quickdraw shootouts, the legacy of frontier life is one that persists more than 150 years later, capturing the attention of both Americans and non-Americans alike. How often, though, in our countless reimaginings and glorification of that time do we get the story right?

A Retelling for the Masses 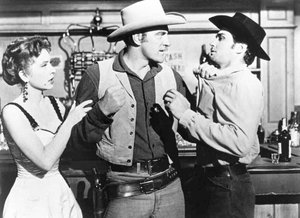 From the establishment of small, rural communities to the development of new markets and judicial systems, there is little doubt that life on the frontier was not without confrontation. Officially established in 1872, Dodge City, Kansas is largely considered the first and most famed of the “Old West” settlements, and an iconic representation of life on the American frontier. Perhaps it makes sense then that Gunsmoke, one of the longest-running television shows in American history, would take up the mantle as one of the most realistic representations of life in Dodge City.

“It’s honest, it’s adult, it’s realistic,” said John Wayne, the famed American cowboy of the silver screen in 1955. Boasting a relatively primitive set-up, Gunsmoke set out to capture the grit and grime of Dodge City with candor. Its storylines are complete with homesteaders and fugitives, regular dustups with the Indigenous Americans of neighboring territories, the noble and ethical protagonist, Marshal Matt Dillon and his band of comrades.

In his biographical tribute to the show, Gunsmoke: An American Institution, film and television historian Ben Costello interviewed many of the actors and crew involved with the show, who note this very point as an example of the show’s lasting endurance.

“I’ve been watching some of these shows on the Westerns Channel, and hell, they’re holding up good,” Gunsmoke stunt man and actor, Dean Smith, told Costello. Costello began documenting the show just shy of its 50th Anniversary and has authored what is arguably the most comprehensive biography of Gunsmoke, including a detailed account of all 635 of Gunsmoke’s episodes, nearly twenty pages of behind-the-scenes shots and episode stills.

For his part, Costello also came to understand a great deal about the history of the American West—specifically, what is often captured in its retellings and what Gunsmoke sought to do, discarding tired caricatures in favor of a more realistic, more adult storyline. “No gimmicks. No faithful horse and no stuttering, lisping second bandana,” Costello writes in his introduction to the book. “In short, no bullshit.”

A Story for All 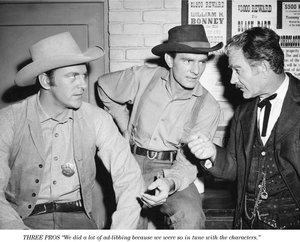 But what is it about Dodge City—and frontier life in general—that folks find so captivating?

“As a child we would watch and enjoy Gunsmoke as a family,” Costello says, recalling fond memories of the Gunsmoke lunchbox that he toted to school each day. “Dodge City is a real place—incidentally, with some of the nicest people ever—and it was a hub for the cattle drives and buyers going west. There is an actual Long Branch Saloon and the town is just brimming with historical events.”

It could certainly be said that Gunsmoke was ahead of its time for its depiction of Miss. Kitty, the fierce and independent proprietor of the Long Branch Saloon. A role rarely depicted when the show debuted in 1955, the role of Miss Kitty—a rough and tumble saloon owner—presented a glamorized, yet not entirely inaccurate picture of what it meant to be a woman in the wild west. Like the real-life, guns-a-blazing women that came before her—Annie Oakley, Calamity Jane, and Belle Starr, to name a few—Miss Kitty showed television watchers that the American west offered far more for women than cooking, sewing, and cleaning.

In fact, the real-life legend, Belle Starr was said to favor buckskins and books over the more traditional Victorian dresses of the time and was known to proudly display a pistol on either hip, commit robberies, and frequent saloons. Starr reportedly died in classic old west fashion: shot in the back while en route back to her ranch. 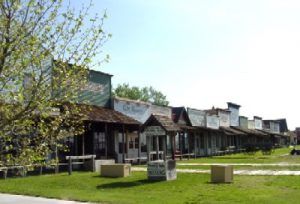 Traveling to Dodge City today, you will find a handful of relics that serve as a tribute to an older, fiercer time in the town’s history. Notably, Boot Hill Museum still stands in the town’s center, containing a partial reconstruction of Dodge City’s Front Street, the downtown that existed in 1876, and the original Boot Hill Cemetery, so named for its residents, who often died “boots on”—and regularly in one of the storied shootouts often captured in the iconic retellings of the wild west.

You can catch re-runs of Gunsmoke on MeTV and INSP, or stream it live on CBS All Access.

To order a copy of Ben Costello’s Gunsmoke: An American Institution—including some epic photographs like the ones shared above—mosey on over to www.gunsmokebook.com. 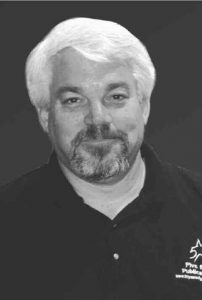 About the Author of Gunsmoke: An American Institution

Ben Costello is a self-confessed film and television buff. Since the age of five, he has appeared on stage in a variety of dramatic and comedic roles. He also enjoys writing and directing. Along with fellow comedian John Babrowski, Costello has played in casinos and clubs from New York City to Las Vegas, frequently portraying characters similar to Abbott and Costello (no, Ben Costello and Bud Costello are not related). In fact, Costello and Babrowski performed the classic Who’s on First routine at the Baseball Hall of Fame in Cooperstown, New York, to kick off the 2000 World Series. They were the first to do so since Abbott and Costello performed the skit there 44 years earlier. Costello wrote, produced, and co-starred in The Whitley & Costello Show in 1979. In 1987, he took the classic Laurel and Hardy movie Way Out West and adapted it for the stage, with the blessings of Lucille Hardy Price, widow of comedian Oliver Hardy. In 1988, his play titled Company B debuted. The show, a slapstick musical tribute to World War II, was so popular that it spawned five stage sequels. For his work on this production, Costello won Best Actor, Writer, Director, and Production awards from the Southern California Theatre Leagues. Costello teaches seminars on Hollywood Comedy and Comedians and is an authority on television and motion picture Westerns. A divorced father of one, Costello makes his home in the desert community of Joshua Tree, California.