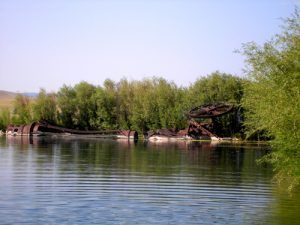 Gold Creek, Montana was the first place that gold was discovered in Big Sky Country. In 1852, a trapper named Francois Finlay, who was also known as Benetsee, found the first recorded gold in what became known as Benetsee Creek. Keeping his find a secret after doing a little gold panning, it would be six more years before anything really developed. In 1858, three more prospectors, namely James and Granville Stuart and Reece Anderson, discovered gold in the creek, but having no supplies and concerned about Indian attacks, they soon left the area. Four years later, they returned and a small mining camp developed at the mouth of the creek that was first called American Fork. Later, both the town and the creek were renamed “Gold Creek.”

The mining camp never grew very large, maxing out at about 50 people, as soon after it was established, bigger finds were made at Bannack, and later, at Virginia City, drawing all the miners away.

Today, Gold Creek is a small agricultural town located about 12 miles southeast of Drummond, Montana, just off I-90. There are no mining remains in Gold Creek, but just southwest of the tiny town, are the remains of a number of old buildings and near the creek, evidence of dredging and tailings can be seen.