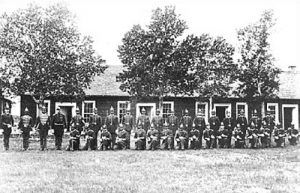 Fort Shaw, Montana, was first called Camp Reynolds when established in 1867. The post was tasked with guarding the road between Fort Benton and Helena and protecting the miners and settlers in northwestern Montana.

During the 1876 campaign against the Sioux and Cheyenne, Colonel John Gibbon, the base commander, led the garrison up the Missouri River, procured reinforcements at Fort Ellis, Montana, rendezvoused with the forces of General Alfred Terry on the Yellowstone at the mouth of the Rosebud, and subsequently relieved the survivors of Custer’s regiment at the Little Bighorn. The following year, troops from Forts Shaw, Ellis, and Missoula, again under Gibbon, defeated the non-treaty Nez Perce, retreating from Idaho to Montana at the Battle of the Big Hole.

After the Army relinquished the fort in 1891, the Department of the Interior used it as an Indian school for many years. At that time, workmen covered the frame-roofed adobe buildings with wood siding and erected some new buildings. Later the U.S. Bureau of Reclamation occupied the fort. In 1926 ownership was passed to the Fort Shaw School District.

Since then, a few of the buildings have been used for school and community purposes, some have been rented to private individuals, and others have deteriorated or been demolished to make way for new construction. The location, in Cascade County, is on Montana Highway 20 about 1/2 mile northwest of the town of Fort Shaw.