Fort Ellis, Montana was a United States Army fort established on August 27, 1867, east of present-day Bozeman, Montana. Built by Captain R. S. LaMotte and three companies of the 13th U.S. Infantry, its purpose was to protect the miners and settlers moving into or traveling through the Gallatin Valley. It was named for Colonel Augustus van Horne Ellis who was killed in 1863 at the Battle of Gettysburg, Pennsylvania, during the Civil War. Nearby Fort Elizabeth Meagher was abandoned after Fort Ellis was built.

Troops from the fort participated in many major campaigns of the Indian Wars. In January 1870, Major Eugene M. Baker led troops of the Second Cavalry against the Piegan tribe, culminating in the Marias Massacre.

The fort figured in prominently in the 1876-81 Sioux campaigns; it was the base at which Colonel John Gibbon, operating out of Fort Shaw, Montana, acquired additional troops in 1876 before proceeding eastward in the ill-fated operation that ended in the Custer disaster at the Battle of the Little Bighorn. Gibbon also led Fort Ellis troops in the Battle of the Big Hole, Montana, in 1877. Troops from Fort Ellis also participated in the Nez Perce War in 1877. 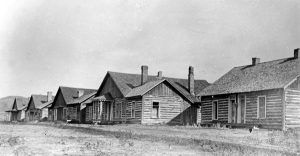 After decommissioning, the parade ground was used by the Montana Militia for some time, and in 1924 many of the fort’s buildings remained. However, today only the two-story house that was the Commanding Officer’s quarters continues to stand. Renovated today, the building is occupied by the Agricultural Experimental Station operated by Montana State University. A commemorative monument is located just off I-90 in Gallatin County, about 3 1/2 miles east of Bozeman.