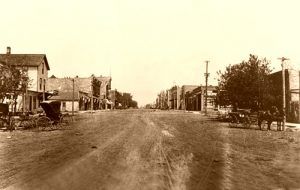 Built in present-day Eureka, Kansas, in Greenwood County in 1861, Fort Montgomery was named in honor of Colonel James Montgomery, a Free-state leader during the Kansas-Missouri Border War. Constructed by local citizens, the fortress was a solidly built large rectangular building with gun-hole windows. It was surrounded by layers of green logs covered with earth up to the level of the gun holes. Built to protect local citizens from Indian attacks and pro-slavery forces, a small cannon was mounted outside. It was commanded by a local farmer named Leander Bemis but was sometimes occupied by local militia and government scouts.

In 1861, when Eureka’s school burned, classes were taught at the fort. Late in the Civil War, the fort expected a guerilla attack, and the locals made themselves ready to fight. However, the attack didn’t come. In 1868, regular U.S. troops again occupied the fort, but their stay was brief. Afterward, the post was dismantled and used for firewood. Today, all that is left is a marker on a building in Eureka at First and Oak Streets.