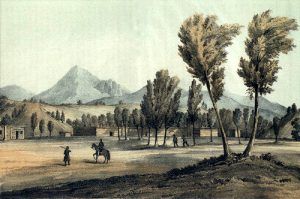 Fort Massachusetts, Colorado, was officially established on June 22, 1852, to protect travelers and settlers in the area from Indian attacks.

The post was built on the west bank of Ute Creek at the base of Mount Blanca in the San Luis Valley of southern Colorado. The first permanent settlement in the state, the fort was described in 1853 as: “a well-built stockade of pine logs, ten feet in height, and enclosing very comfortable quarters for one hundred and fifty men.”

Though the Ute Indians had signed a peace treaty in 1849, as more and more settlers moved into the area, the whites brought with them diseases, encroached upon the Indians’ land, and depleted the wild game, making hunting difficult. As a result, the angry Indians raided settlers and villages for food. The troops at Fort Massachusetts were tasked with stopping the raids with a small garrison of soldiers. The post also provided a headquarters for Indian agents.

In 1854, conflicts between the Indians and settlers reached a peak in what is known as the Fort Pueblo Massacre. Fort Pueblo was a trading post located in present-day Pueblo, Colorado. During a celebration at the fort, the traders let in a group of Indians who they thought were friendly. However, the Indians attacked, killing 15 men and kidnapping a woman and two boys. The soldiers at Fort Massachusetts were then fortified with troops from Fort Union, New Mexico, to permanently subdue the Indians who were eventually forced to cede their lands in the San Luis Valley.