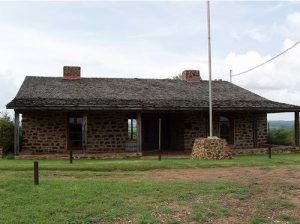 In 1848, the government authorized a line of army forts from the Rio Grande to the Red River, one of which would later become Fort Mason, Texas. The site was located on Post Oak Hill near Comanche and Centennial Creeks in present-day Mason County. The fort was established in July 1851 by Brevet Major Hamilton W. Merrill and two companies of the Second Dragoons. It was named for either Lieutenant George T. Mason, who was killed at Brownsville during the Mexican War, or for General Richard Barnes Mason, who died only a year before the fort was established. For the next decade, the post protected area settlers from Indian attacks and gradually drove the Kiowa, Lipan Apache, and Comanche farther away. During the Civil War, it passed into the hands of the Confederates. It was briefly operated as a prison camp in 1862 when the Confederate Army held more than 200 men — mostly civilians accused of being Union sympathizers.

While the soldiers were busy fighting the war, the Indians returned in full force and attacks and raids on settlers became more common than at any time before. when the Civil War was over, Federal troops reoccupied the fort in December 1866. The post was repaired and improved, and the soldiers tasked with not only fighting Indians but also the rampant lawlessness created by Reconstruction. However, by 1869, the fort was only marginally staffed with about 70 men. It was closed in March 1869 and its some 25 buildings left vacant. The following year, when the State of Texas organized several companies of frontier forces, the fort was reoccupied under Captain James M. Hunter. The occupation lasted only a year, and in 1871, it was closed for the last time. The buildings and land were sold to private citizens and the rock buildings dismantled.

In 1975 a local group of citizens began reconstructing one of the officers’ quarters at the site. The building sits on its original foundations and the rock used was from the original building materials of the fort. It is about five blocks south of the Mason County courthouse in Mason, Texas.