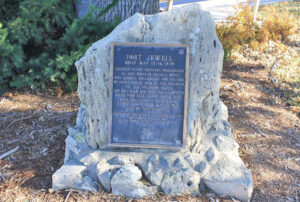 Fort Jewell, Kansas, located on the Smoky Hill Trail, was built in May 1870. It was named in honor of Lieutenant-Colonel Lewis R. Jewell of the Sixth Kansas Cavalry, who died during the Civil War of wounds received in the Battle of Cane Hill, Arkansas.

After three men were killed by Indians at the milldam on the Solomon River, a meeting was held on May 13, 1870, “to discuss means of defense against the Cheyenne,” who were then on the warpath. At this meeting, W. D. Street proposed the erection of a fort, and a company called the “Buffalo Militia” was immediately organized to carry it out. W.D. Street was chosen captain of the company,

The fort was garrisoned by Street’s company until some time in June 1870 when it was occupied by a detachment of the Third United States mounted artillery. The soldiers remained until Fall and no attack was ever made. It is quite probable that the prompt action of the settlers in erecting this defense may have prevented any demonstration on the part of the Indians.

After the Indian threat had passed, the fort was allowed to fall into decay.

A bronze plaque and monument stand in a city park four blocks west of the old fort site in Jewell, Kansas. Jewell is located on state highway K-14 southeast of Mankato in Jewell County, Kansas.