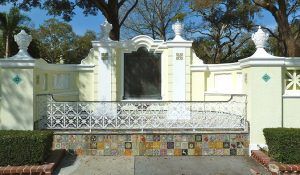 It was located on a bluff 25 feet above Clearwater Harbor about 30 miles west of Fort Brooke. From two to seven companies of the 6th U.S. Infantry were stationed at the fort during its occupancy under the command of Lieutenant Colonel Gustavus Loomis of that regiment. The post served as a U.S. Army recovery center for sick and wounded troops. In September 1841, five companies of troops were transferred back to Fort Brooke and Fort Harrison was abandoned the next month.

Today, the site is on private property located in the Harbor Oaks development of Clearwater, Florida. A historical marker designates the site at 802 Druid Road South.