Fort Ethan Allen was a United States Army installation located in Essex and Colchester, Vermont. It was established in 1892 as a U.S. Army cavalry and field artillery training post on land once owned by American Revolutionary War figure Ethan Allen. The fort was named for him. 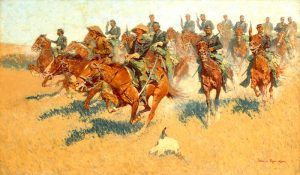 One of the largest cavalry and field artillery training posts in the United States, the fort included two 240 man cavalry barracks and an officers row with brick quarters that included a commander’s quarters, bachelor officer quarters, and duplex quarters for the company grade married officers. Officer’s row curved around a large central parade ground. Other buildings included an administration building that included a library and reading room, a schoolroom, a court-martial room, and offices for the commanding officer, the adjutant, and their clerks, stables, and a bakery, a hospital, and various sheds, shops, and storehouses. The post was laid out so that all principal buildings had a southerly view over the Winooski River Valley with Mount Mansfield and Camel’s Hump in the background. The fort could hold a population of up to 8,000 people and 1,800 horses.  A great stone water tower provided sufficient water for the post. The fort was first occupied in September 1894 by the 3rd U.S. Cavalry.

A train spur was constructed in anticipation of the Fort being built. In 1905, the Fort was electrified, and an electric trolly was extended to the post that same year. 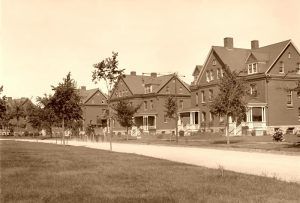 During World War I, the post was one of 15 designated officer training camps in the country, and the fort held as many as 8,000 troops. Among the trainees were ROTC cadets from Norwich, Harvard and Yale Universities, and the University of Massachusetts.

In 1933 Franklin Roosevelt’s New Deal marked a new and contributing role for Fort Ethan Allen when the fort was made the headquarters for the Vermont Civilian Conservation Corps until 1938. During World War II, Fort Ethan Allen was again used as a training post.

In 1944, Fort Ethan Allen was deactivated by the U.S. Army, and most of it was used as a storage depot. The Federal Housing Authority also used part of the Fort for civilian residents.

It was taken over by the Air Force in 1952, became home to the 134th Fighter-Interceptor Squadron of the Vermont Air National Guard, and was renamed Fort Ethan Allen Air Force Base. The Base closed down in 1960 and was declared surplus in 1962. 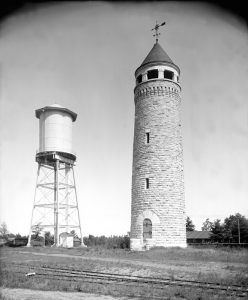 Afterward, 787 acres were given over for the use of the Vermont National Guard’s headquarters, now called Camp Johnson. The United States General Services Administration divided the remaining 400 acres of land and buildings. Saint Michael’s College and the University of Vermont signed a contract in 1964 which gave each of them ownership of several acres and buildings. The University of Vermont received almost 50 acres, Saint Michael’s College received about 40 acres for educational purposes. The State of Vermont also received 20 acres, and the rest was sold to private developers.

The former grounds of Fort Ethan Allen now stand on the north side of Vermont Route 15, roughly divided in half between southeastern Colchester and southwestern Essex. The grounds, comprising 130 acres, are organized around the large elliptical parade ground located just north of the main road, which now serves as a community park. Beyond the park can be found a variety of former military buildings and structures that were later erected.

Since the construction of the Fort in 1894, the parade ground was a central focus of the community. The 35-acre expanse of open fields lined the winding road of Officer’s Row. From their large front porches, the officers were able to observe special events on the parade ground that ranged from concerts to cannon firings and troop reviews to tennis tournaments, baseball and football games, polo, and horse shows. This land was initially given over to the University of Vermont in 1964. In July 1991, it was purchased by the Vermont Housing and Finance Agency who signed it over to the Towns of Essex and Colchester to use as a park. 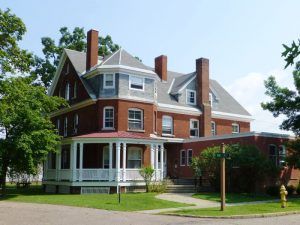 Fronting the parade ground along Dalton Drive are houses that originally served as officer housing. This land was part of the property given over to the University of Vermont. The first structures seen from Route 15, these beautiful Colonial Revival-style homes, were once used to house commissioned officers in the Fort. The social structure of the military determined the placement of these regal, stately buildings. The dominance of Officer’s Row buildings reflected the importance of the men and their families housed inside. Most of the 22 structures were built to house two families, but three were single-family units. These included the Commanding Officer’s Residence at 503 Dalton Rive, the Fort Surgeon’s house at 402 Dalton Drive, and the Mounted Services Officer’s Club and living quarters for the bachelor officers at 600 Dalton Drive. 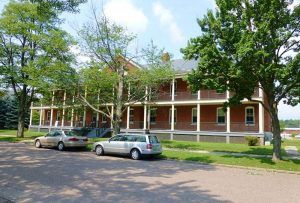 The University of Vermont utilized these homes for several years as housing for faculty and staff of the university. In 1979, they converted 17 of the buildings into dormitories to rectify a shortage of undergraduate housing. However, the university soon found that the costs of maintaining the structures proved too difficult, and in 1988, they proposed selling them on the open market. However, this idea met with much resistance within the county as officials spoke about the lack of housing and the preservation of historic resources. In the end, the buildings were sold to developers and converted into private condominiums for residential housing. The restoration was beautifully done, and for the most part, Officers Row today looks very much as it did one hundred years ago. Unfortunately, the Fort’s Administration Building was destroyed by fire in 1993.

Other buildings utilized by the University of Vermont include the Ethan Allen Apartments, which occupy six of the former non-commissioned officer’s quarters, originally built between 1894-1900. Six more were built in the 1930s. These apartments provide family housing on the east side of the Fort. The university also constructed the County Apartments in the open space between the enlisted men’s barracks and the back of the officer’s quarters utilized by married students in the 1970s. Land adjacent to the County Apartments is home to Vermont Public Television, which leases the space from the university. The University of Vermont also owns many of the buildings near the tower, now used for storage. 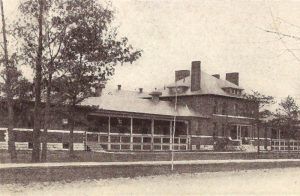 St. Michaels College owns several of Fort Ethan Allen’s original buildings. The college used several barracks buildings, some of which were converted into classrooms, and others that now serve as student dormitories.

The red brick Colonial Revival style Post Exchange was built in 1904 as a post office for the base soldiers. It also provided a Barbershop and Tailor shop, which were located on the second floor. It currently serves as a residential hall for sophomores and is called Linnehan Hall. The college also owns the Drill Hall, Herrouet Theater, and The Chapel, but these buildings are not currently used.

The Riding Hall, or Drill Hall as it is called today, was built in 1895. It was used for cavalry until 1944 for practicing and exercising and for entertainment purposes before the building of Herrouet Theater. After 1944, the building was converted into a post gymnasium. Today the building is appreciated for its Romanesque Revival style brick entrance.

The red brick Colonial Revival style Herrouet Theater was built in 1933 and provided the Fort community with a beautiful stage for dramatic entertainment. In the 1980s, the Repertory Theater Company used the space to hold their events. The Greek Revival-style base chapel, built in 1941, is located next to the Herrouet Theater at the center of the Fort. 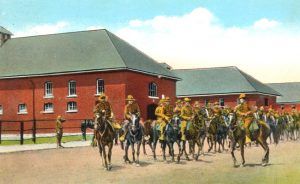 The State of Vermont initially used the fort’s Veterinary Hospital, built-in 1908, for its police headquarters. Its symmetry, red brick, stone lintels, and large arched doorways are similar to the Romanesque Revival style seen in the Drill Hall. The old hospital was sold to Vermont Public Radio in 1994, who renovated the building, making extensive changes, but the exterior facade on the front and sides is preserved.

The State Highway Department is currently using the former air force hangars and maintenance shops. The 1894 Guard House was once used to hold individuals who were under arrest awaiting trials and sentencing. Today the building is currently used for apartments. The red brick two and one-half story Base Hospital, built in 1894, has been converted into the Green Mountain Nursing Home. The Riding Hall was refurbished and now houses the Vermont Youth Orchestra. All of the stables and garages at the back of the fort are privately owned businesses.

The Fort Ethan Allen Museum is located in the former 1890’s era Pump House, at 11 Marcy Drive. It is open by appointment.

Fort Ethan Allen was nominated for the National Register of Historic places in 1988, and the majestic qualities of the buildings earned the Fort district’s historic status. A small marker is attached to a boulder at the entrance to officers row, and many historic buildings are marked. 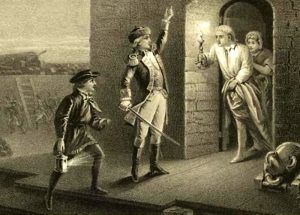 Ethan Allen in the American Revolution