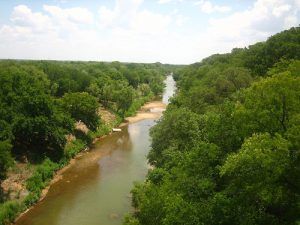 Fort Colorado, Texas, also known as Fort Coleman and Fort Houston, the post was established in the fall of 1836 by Colonel Robert M. Coleman and first garrisoned by two or three companies of the ranger battalion. Standing on high ground on the north bank of the Colorado River just west of Walnut Creek, the fort was a key post in the chain of defensive positions established by the Republic of Texas.

Other links in the barrier against the raiding Plains Indians included Little River Fort, Fort Milam, and Fort Houston. It consisted of two one-story blockhouses and a number of cabins enclosed within a high stockade wall. Fort Colorado and its ranger garrison contributed greatly to the lull in border warfare between white settlers and Comanche and Kiowa Indians during its brief use. The fort was active until April 1838, when it was abandoned.

Afterward, area settlers quickly stripped the fort of its lumber and hardware. All that is left today is a historical marker. The site is located 2½ miles northeast of the Montopolis Bridge in Austin, Texas.