On January 1, 1718, the French government granted a trade monopoly to John Law and his Company of the West. Law planned to consolidate French colonial trading companies in the New World to mine precious metals and control all trade and banking in the Louisiana Colony. 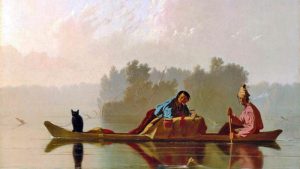 The company built forts to protect its interests, including Fort de Chartres in 1720. The wooden fort was built by Pierre Dugué de Boisbriand, leading a French contingent from New Orleans. The fort was comprised of a palisade of logs with two bastions at opposite corners and was surrounded by a dry moat. The fort’s purpose was to be the seat of government and control the Indians of the region, particularly the Fox. It was named in honor of Louis, duc de Chartres, the son of the Regent of France.

The fort and the nearby village of Prairie du Rocher flourished briefly. The settlement, however, was never as important as its neighbors, Kaskaskia, where the Jesuits established an academy, and Cahokia, where the Catholic priests maintained an Indian school. Across the Mississippi River from Kaskaskia was a fourth settlement — Ste. Genevieve, Missouri. Originally a fur depot, by 1740, it had developed into a town. Because of its location on the river’s west bank and its ready availability to the trappers and traders, it soon equaled the Illinois villages. Part of its growth was due to the opening of small lead mines in the Missouri Ozarks, which utilized it as a port.

By 1725, flooding from the Mississippi River had left the original fort in bad condition, and a new fort was constructed further from the river but still on the flood plain. This fort was also made of logs and had a bastion at each four corners. It too deteriorated over the years and by 1742 was in bad repair. 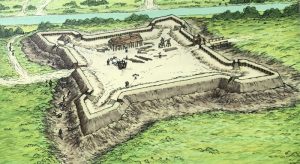 In 1747 the French garrison moved to the region’s primary settlement of Kaskaskia, 18 miles to the south. The French then debated where to rebuild the fort, which would be made of stone this time. Construction of the new limestone fort near the two previous sites began in 1753. The stone for construction was quarried in bluffs about two or three miles distant and ferried across a small lake. When it was completed in 1756, the fort’s stone walls were 18-feet high and two feet thick, enclosing an area of four acres. An impressive fortification, it had a bastion at each of the four corners and a massive gatehouse. Inside the complex were two long barracks, a guardhouse, officer’s quarters, a powder magazine, kitchen, and outbuildings, arranged around the parade ground. The fort could accommodate a garrison of 400 men but usually was manned by only half that number.

Following the French and Indian War, the fort fell under British rule in 1763. In October 1765, a small detachment of the Royal Highland Regiment took control of the fort and surrounding area. Soon, all French Canadian settlers were ordered to leave or get a special license to remain. The British abandoned the post in May 1772 when most of the soldiers were ordered back to Philadelphia, Pennsylvania. Afterward, the Mississippi River continued to take its toll on the fort, and soon the south wall and bastion fell into the river. 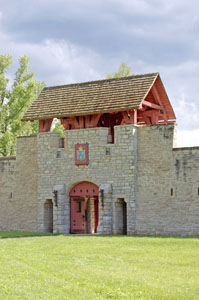 The remaining walls also deteriorated, and by the 1820s, visitors noted trees growing in them. Locals utilized the stones for other construction purposes, and by 1900 the walls were gone.

The State of Illinois acquired the ruins in 1913, at which time, the only part of the original fort that remained was the stone masonry powder magazine. In 1917, the fort’s powder magazine was restored and is now thought to be the oldest standing building in Illinois. In the 1920s, the foundations of the fort’s buildings and walls were uncovered, and a combination museum and office building were built on the foundation of an original fort building. In the 1930s, the Works Progress Administration rebuilt the gateway and two stone buildings. In 1936, the large stone Guards House was reconstructed. Partial reconstruction of the fort’s walls on the original foundations was completed in 1989.

The site and its associated buildings were placed on the National Register of Historic Places and recognized as a National Historic Landmark on October 15, 1966. In 1974, it was named one of the contributing properties to the new French Colonial Historic District, along with the Creole House, the Pierre Menard House, the former Indian village referred to as the Kolmer Site, and Fort Kaskaskia. In 1976, the site was added to the National Register of Historic Places.

The state historic site hosts several large re-enactments at the fort of colonial-era civil and military life each summer. The museum houses exhibits depicting French life at Fort de Chartres, and the powder magazine is stocked with reproduction barrels and barrel racks. The north wall contains bastions, the gatehouse, musket ports, cannon embrasures, and the restored powder magazine. The large stone Guard House contains a Catholic chapel furnished in the style of the 1750s, along with a priest’s room, a gunner’s room, an officer-of-the-day room, and a guard’s room. 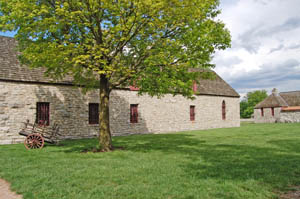