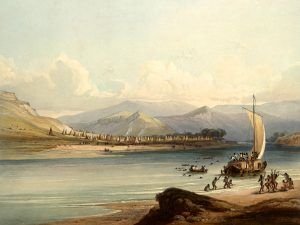 Camp of the Gros Ventre on the Upper Missouri River by Karl Bodmer, 1832

Fort Belknap, Montana, was first established by Nellie Peck and E.H. Durfee as a fur trading post for the North West Company in 1871. It was named for William W. Belknap, the U.S. Secretary of War at the time. It was built on the south bank of the Milk River, one mile southwest of the present town of Chinook, Montana. It was discontinued as a trading post in 1886.

A few years later, the Fort Belknap Indian Agency, located 30 miles east, adopted the name in 1888 when it established a government agency and reservation for the Gros Ventre and Assiniboine Indians living in the area. It also served as a sub-agency for the River Crow Indians. Jesuits came to Fort Belknap in 1862 to convert the Gros Ventre people to Catholicism. In 1887, St. Paul’s Mission was established at the foot of the Little Rocky Mountains, near Hays, Montana, about 23 miles southwest of Fort Belknap. It continues to serve a congregation today.

The Fort Belknap community soon grew up around the Indian agency. It is located four miles southeast of the present town of Harlem, Montana.