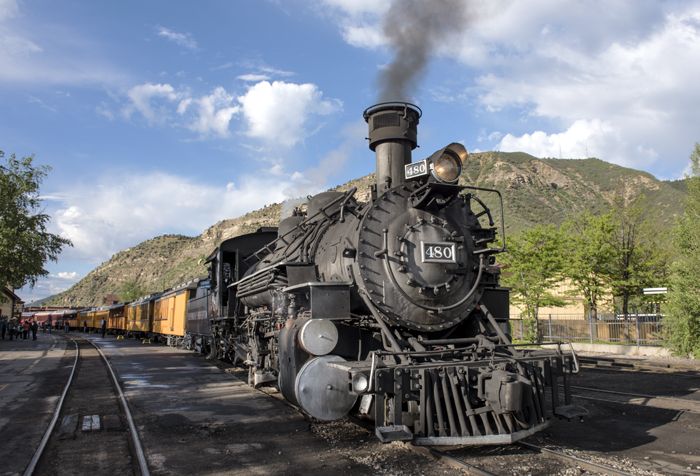 The Durango & Silverton Narrow Gauge Railroad, in continuous operation since 1882, makes its way 45.4 miles from Durango to Silverton, Colorado through the backcountry of the San Juan Mountains.

A National Historic Landmark, the three-foot narrow-gauge coal-fired, steam-powered railroad, winds through spectacular and breathtaking scenery along the same tracks that miners, cowboys, and settlers of the Old West took over a century ago.

The route was originally opened in 1882 by the Denver & Rio Grande Railway to transport silver and gold ore mined from the San Juan Mountains.

To railroad builders, particularly in the Rocky Mountains in the late 19th Century, the narrow gauge offered very definite advantages. The promoters of the Denver & Rio Grande Railroad pointed out that the narrow gauge system could be constructed for at least 37% less than could broad gauge in the same terrain. These narrow gauge railroads could also use the sharper curves necessitated by rugged terrain without sacrificing safety and were more efficient in that they required less equipment weight per ton of payload. 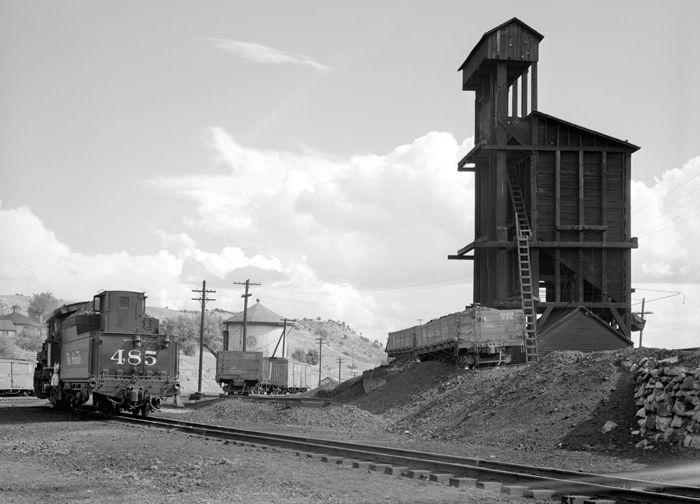 The lure of the wealth in the “Silvery San Juans” induced the Denver & Rio Grande Railway to begin building westward from the San Luis Valley. Durango was founded by the railroad in 1880 and a line was extended from Antonito, Colorado to Durango, arriving in July 1881.

By this time, Chief Engineer R. E. Briggs of the Denver and Rio Grande had assembled a staff of experts at locating and grading for narrow gauge construction. G. H. Wigglesworth, assisted by Edward Funke, located the line up the Animas River to Silverton, and grading crews went to work at several locations.

In the fall of 1881, tracklaying north of Durango began and by December 11, had been completed as far as Rockwood, while grading had been largely completed to Cascade Park nine miles beyond.

Grading and tracklaying proceeded in the gorge of the Animas River, and on July 8, 1882, the first passenger train followed the tracklayers into Silverton and touched off a wild celebration which lasted several days. In that year, the “Silvery San Juan” produced $20,000,000 worth of ore, and by 1884, the Denver & Rio Grande had 1600 miles of narrow gauge lines in Colorado and Utah. 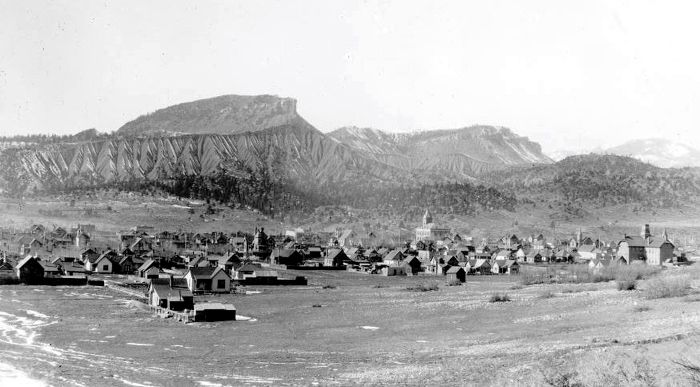 Although the line was constructed primarily to haul mine ores, the railroad also promoted it as a scenic route for passenger service from the beginning. Soon, two or more trains a day each way were available between Silverton and Durango.

The railroad was often plagued by Mother Nature when snow avalanches blocked the line and floods washed out the tracks. These events frequently stopped the trains from running for several weeks in spite of heroic efforts on the part of special snow removal and repair crews.

In 1893, the Silver Panic caused several mines to close in the area but gold was soon found in the district. By 1897, gold made up half the mineral output of the region and newspapers were reporting that there was so much mining going on that even the railroad could not move the ore fast enough.

The turn of the century brought many challenges to the railroad, including snow slides, floods, war, and financial instability. When the US Government entered WWI, it assumed operation of the railroad. Shortly afterward the Denver & Rio Grande reorganized due to financial difficulties. In the meantime, many of the mines in the area were beginning to play out. 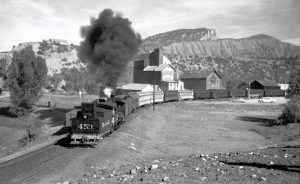 By 1947 the Silverton branch of the railroad was in danger of being abandoned. However, a determined staff stepped in and helped to promote tourism to keep the line alive. Bolstered by national exposure from Hollywood movies being filmed along the line in the late 1940s, the railroad created “The Silverton,” a summer-only train service, and in 1947 it carried 3,500 passengers.

By 1952, tourist interest had induced the management of the line to increase the train ‘s passenger facilities considerably, and in 1953, summer operations were stepped up to three times a week. That year, the railroad carried more than 12,000 passengers.

In 1955, the railroad began active promotion of the line as a tourist attraction and for the first time in decades, seven-day-a-week operations were resumed during the Summer months. 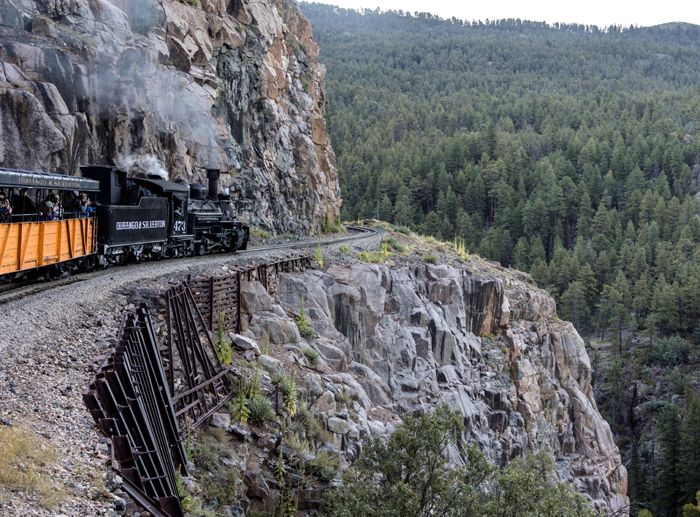 By 1960, the Denver & Rio Grande did not see the Silverton Branch as worthy to maintain and filed a petition to abandon the route. However, the Interstate Commerce Commission declined to grant the request due to the continued increase in tourist patronage.

The Durango–Silverton line was named a National Historic Landmark in 1961 and the Denver & Rio Grande Railroad began to embrace and promote tourism. By 1962 it attracted more than 37,000 passengers during the summer season. The company began to invest in additional equipment, maintenance, made improvements to the Durango depot and facilitated the opening of a Victorian-style shopping district. In Silverton, the rails were extended to Blair Street to deliver tourists directly into town. As ridership continued to grow, the railroad began to operate a second train to Silverton on certain days.

The last Denver & Rio Grande Railway train to operate into Durango from the east was on December 6, 1968. The states of New Mexico and Colorado purchased 64 miles between Antonito and Chama, New Mexico, in 1970 and operates today as the Cumbres & Toltec Scenic Railroad.

In 1969 the railroad abandoned the tracks south of Durango, isolating the Silverton branch and leaving the future of the line in question. 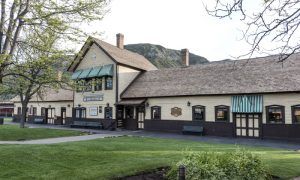 By 1971, the Silverton branch and nearby Cumbres and Toltec Scenic Railroad were the only remnants of the Rio Grande’s once extensive narrow-gauge system.

Bradshaw then founded the Durango & Silverton Narrow Gauge Railroad and began to make improvements. Bolstered by the assistance of the former Rio Grande operating managers and a relatively sizeable staff of new employees, Bradshaw’s plans were set in motion immediately. The older locomotives were restored to operating condition and the vintage coaches were also restored. Durango’s tourist image expanded as new businesses and revamping of the old railroad town continued to take shape. By 1986 there were four trains running to Silverton with a fifth running to Cascade Canyon Wye. 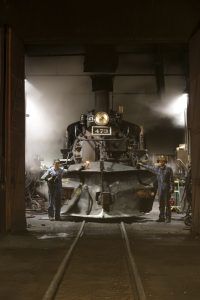 Steam locomotive in the roundhouse of the Durango & Silverton Narrow Gauge Scenic Railroad in Durango, Colorado. By Carol Highsmith.

Today the Durango & Silverton Railroad is owned and operated by American Heritage Railways.

The vintage locomotives used to pull the train remain 100% coal-fired and steam-operated. Because of the railroad’s booming tourist business, more daily trains depart Durango today than at the height of the mining boom a century ago.

Though the mines and mills are closed and ghost towns dot the mining districts, the whistle of the old Denver & Rio Grande Railroad still echoes from the canyon walls.

The Durango & Silverton Railroad operates two museums, one in Durango and another in Silverton. Both feature historic locomotives and railway equipment. 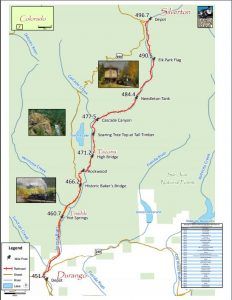