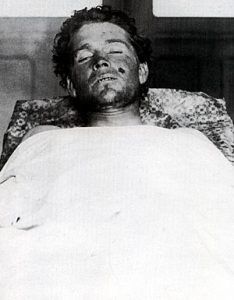 Hailing from Texas, Young was working as a cowboy near Roswell, New Mexico when he hooked up with the likes of George Musgrave and Bob Hayes, who were also wrangling in the area. After a while, the three drifted on down the line, taking jobs in southeastern Arizona Territory where they met Black Jack Christian and his brother Bob. With all having outlaw inclinations, the men soon formed the High Fives Gang, named after a popular card game of the time. The gang would rustle cattle, and rob banks, trains, and post offices.

Code was with the gang when they robbed a general store and post office in Separ, New Mexico on July 20, 1896.

He was also with the gang when they attempted to rob the International Bank in Nogales, Arizona on August 6, 1896.

However, on the night of October 2, 1896, when the gang attempted a train robbery in Rio Puerco, New Mexico, luck would run out for Young. The gang intended to rob the eastbound Atlantic and Pacific train and were hiding behind the water tank when the train made a brief stop to attend to an overheated crank pin. As the train started forward again, three of the outlaws drew their pistols, aimed them at engineer Charles Ross and fireman Abe Reed, and ordered that them to stop the train again. A shot was then fired which struck the brakeman’s lantern and a second shot put out the light. Engineer Ross was then marched back to uncouple the Express Car. Unfortunately one of the passengers aboard the train was none other than U.S. Deputy Marshal Will Loomis, who was returning from serving subpoenas in Gallup, New Mexico. After hearing the shots, he went to investigate.

While the engineer was working to uncouple the Express Car, Loomis approached from the rear and fired upon the robbers, hitting Code Young. The rest of the bandits immediately fled. Conductor Sam Heady would later say that he heard Young cry out, “I am shot, I can’t come, I’m done for.” But his weak response went unheard by his sidekicks. Code Young died shortly after making his plea. Loomis had been chasing the gang since mid-August, having followed their trail from Santa Fe via Deming to Skeleton Canyon and Mexico.

Lawmen were quickly brought in to investigate and Marshal Will Loomis remained with Young’s body at Rio Puerco when the train continued east to Isleta Junction. The marshal then took another train and accompanied Code Young’s body back to Albuquerque. In the undertaking rooms of O. W Strong, a number of people viewed Young’s remains. A. H. Jones and A. G. Stocket of the Atlantic and Pacific machine shop identified that it was Young’s, claiming to have known the outlaw when he lived in Trinidad, Colorado. Albert V Read, a cowboy from Deming, New Mexico identified the body as Cole Estes from west Texas.

Young was buried on October 5th in the public ground at Albuquerque’s Fairview Cemetery.

High Fives Gang of the Southwest