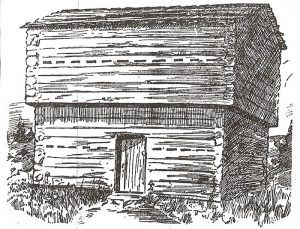 Carnahan’s Blockhouse in Westmoreland County, Pennsylvania was an important fortress during the latter part of the American Revolution.

Located about 11 miles northeast of Hannahstown, and about two miles from the Kiskiminetas River, the blockhouse was built by Adam Carnahan prior to the war to protect his family and area settlers from hostile Indians. In August 1777, the blockhouse was attacked by Wyandot Indians and Adam’s son, John, was killed. Adam Carnahan was not at the blockhouse that day, as he was at home with a sick child, who died the next morning. His son and the child were then buried in the same grave.

Carnahan enlisted in Captain Jack’s Company of the Cumberland County, Pennsylvania Militia, and was called into service on January 1, 1778. He was transferred to Captain John Hodge Company on August 1, 1780, and served until the war ended in 1782.

Carnahan’s Blockhouse became a regular station during the war and a place of more importance after the garrison had been withdrawn from Fort Hand, Pennsylvania, and placed along the line of the Allegheny River. Patriot forces under Colonel Archibald Lochry assembled here in July 1781 to join General George Rogers Clark on the Ohio Expedition against Indians at Detroit, Michigan.

There no remains of the blockhouse that once stood within the limits of what is now Westmoreland, Pennsylvania.

Adam Carnahan, together with his wife, is buried at Poke Run Cemetery, Westmoreland County, Pennsylvania. 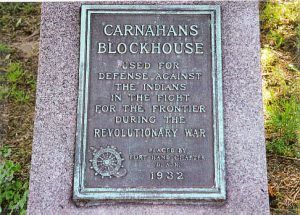