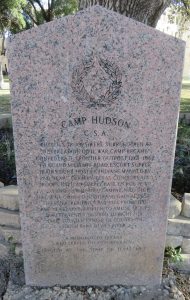 Camp Hudson, also referred to as Fort Hudson, was located on San Pedro Creek, a tributary of the Devils River, 21 miles north of Comstock, Texas.

One of several posts built on the San Antonio-El Paso Road to protect travelers, it was established by Lieutenant Theodore Fink in June 1857 and named for Lieutenant Walter W. Hudson, who died in action on April 1850 as the result of action against hostile Indians. Built along an isolated section of the creek, the post was constructed of a mixture of gravel and lime, which provided very good insulation. A post office at the site opened the same year it was built. Because of its isolated location, there were very few travelers across this section of the road. Most of those who did pass by the fort were military troops, including an experimental camel caravan from Camp Verde, Texas in 1859. When the Civil War began, troops were pulled from the post in March 1861. Though the camp was abandoned by the U.S. Army, the post office continued to operate, serving area settlers until 1866.

When a stagecoach was ambushed by Indians between Camp Hudson and Fort Stockton, and two military escorts were killed in late October 1867, soldiers were once again sent to occupy the post. Over the next several years, various companies occupied the post, which was re-organized in 1871. The soldiers were tasked with protecting travelers, new arrived settlers, and fought with Indians on several occasions. By January 1877, the threat of Indian attacks was over and the post was abandoned. The site is located on a desolate rock-strewn field. A state marker and a small gravestone are all that’s left of the old post. The site is located in Val Verde County, on Texas Highway 163, about 20 miles north of Comstock.