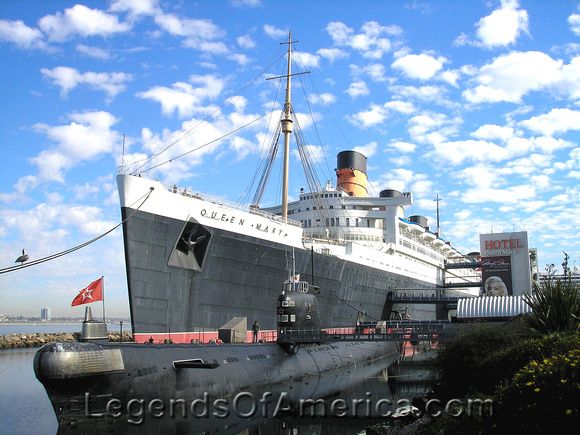 Resting in Long Beach Harbor is the RMS Queen Mary, a colossal ship that was bigger, faster, and more powerful than the Titanic. The 1,000-foot ship began her life when the first keel plate was laid in 1930 at the John Brown shipyard in Clyde, Scotland. The Great Depression held up her construction between 1931 and 1934, but she was finally completed, making her maiden voyage on May 27, 1936.

For three years, the grand ocean liner hosted the world’s rich and famous across the Atlantic, including the likes of the Duke and Duchess of Windsor, Greta Garbo, Clark Gable, David Niven, Mary Pickford, George, and Ira Gershwin, and Sir Winston Churchill, just to name a few. Considered by the upper class to be the only civilized way to travel, she held the record for the fastest-ever North Atlantic crossing.

But, when World War II broke out in 1939, luxury travel immediately ceased, and the ship was transformed into a troopship that would become known as “The Grey Ghost.” During this time, her capacity was increased from 2,410 to 5,500. By the end of World War II, the ship had carried more than 800,000 troops, traveled more than 600,000 miles, and played a significant role in virtually every major Allied campaign. She had also survived a collision at sea, set the record for carrying the most people ever on a floating vessel (16,683), and participated in the D-Day invasion. 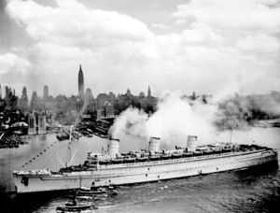 During her service in the war, the Queen Mary was painted a drab grey, hence her nickname, the “Grey Ghost.”

At the close of the war, the ship began to transport more than 22,000 war brides and their children to the United States and Canada. Known as the “Bride and Baby Voyages,” she made 13 voyages for this purpose in 1946.

Its duty to the war complete, the Queen Mary was refurbished and resumed her elegant cruises in July 1947, maintaining weekly service between Southampton, Cherbourg, and New York. However, by the early 1960s, transatlantic cruises were falling out of fashion due to air travel becoming affordable for the masses. In 1963, the ship began a series of occasional cruises, first to the Canary Islands and later to the Bahamas. However, without central air conditioning, outdoor pools, or other amenities now commonplace on cruise ships, she proved ill-suited for the work. In 1967, she was withdrawn from service after more than 1,000 transatlantic crossings.

That same year, the Queen Mary was sold for $3.45 million to the city of Long Beach, California, for use as a maritime museum and hotel. On December 9, 1967, she made her final voyage to Long Beach. After 1,001 successful Atlantic crossings, she was permanently docked and soon became the luxury hotel she is today. 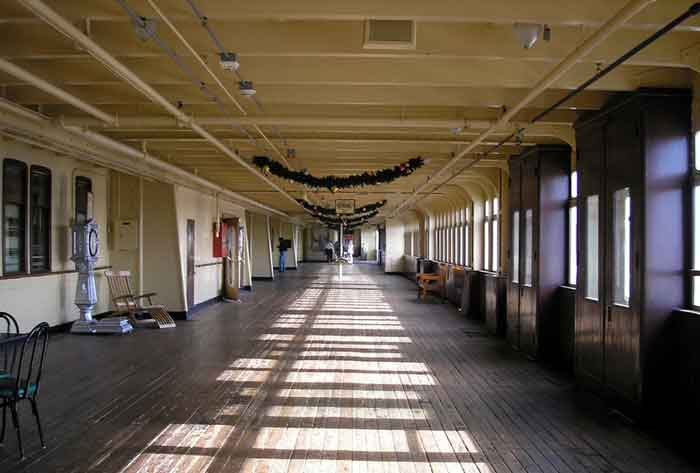 Internationally recognized, the historic floating hotel and museum attracts thousands of visitors every year. It has also attracted a number of unearthly guests over the years. In fact, some say the Queen Mary is one of the most haunted places in the world, with as many as 150 known spirits lurking upon the ship. Over the past 60 years, the Queen Mary has been the site of at least 49 reported deaths, not to mention having gone through the terrors of war, so it comes as no surprise that spectral spirits of her vivid past continue to walk within her rooms and hallways.

Located 50 feet below water level is the Queen Mary’s engine room, which is said to be a hotbed of paranormal activity. Used in the filming of the Poseidon Adventure, the room’s infamous “Door 13” crushed at least two men to death at different points during the ship’s history. The most recent death, during a routine watertight door drill in 1966, crushed an 18-year-old crew member. Dressed in blue coveralls and sporting a beard, the young man has often been spied walking the length of Shaft Alley before disappearing by door #13. 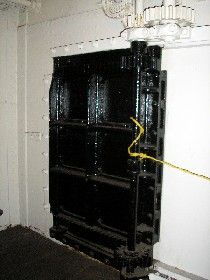 In the area of this heavy door in the Engine Room, we got some very creepy feelings,
Kathy Alexander.

Two more popular spots for the Queen’s otherworldly guests are its first and second-class swimming pools. Though neither are utilized today for their original purpose, spirits seemingly are not aware of that. In the first-class swimming pool, which has been closed for more than three decades, women have often been seen appearing in 1930’s style swimming suits wandering the decks near the pool. Others have reported the sounds of splashing and spied wet footprints leading from the deck to the changing rooms. Some have also spied the spirit of a young girl clutching her teddy bear.

In the second-class poolroom, the spirit of another little girl named Jackie is often been seen and heard. Allegedly, the unfortunate girl drowned in the pool during the ship’s sailing days and reputedly refused to move on, as her voice, as well as the sounds of laughter, have been captured here. However, author, and paranormal investigator, Cher Garman points out that there are no known drownings to have ever occurred on the ship, although she says Jackie is there.

In the Queen’s Salon, which once served as the ship’s first-class lounge, a beautiful young woman in an elegant white evening gown has often been seen dancing alone in the shadows of the corner of the room.

Yet more odd occurrences have been made in a number of first-class staterooms. Here, reports have been made of a tall dark-haired man appearing in a 1930’s style suit, as well as water running and lights turning on in the middle of the night, and phones ringing in the early morning hours with no one on the other end of the line. In the third class children’s playroom, a baby’s cry has often been heard, which is thought to be the infant boy who died shortly after his birth.

Other phenomena occurring throughout the ship are the sounds of distinct knocks, doors slamming and high-pitched squeals, drastic temperature changes, and the aromas of smells long past.

These are a few of the many reports of apparitions and strange events at this luxury liner turned hotel.

Today, the Queen Mary, listed on the National Register of Historic Places, provides not only a wide range of guest rooms for travelers but also 14 Art Deco salons, tours, restaurants, shops, and exhibits. 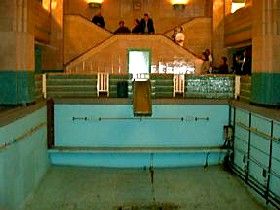 The first-class pool on the Queen Mary is said to host a number of unearthly spirits.

The Queen Mary: A Haunting Like No Other (more about the only officially sanctioned paranormal investigation of the ship)