The Burlington and Missouri River Railroad was a railroad company incorporated in Burlington, Iowa, in 1852, with headquarters in Omaha, Nebraska. It was developed to build a railroad across Iowa and began operations on January 1, 1856, with only a few miles of track. It was acquired by the Chicago, Burlington, and Quincy Railroad in 1872 and kept serving as its subsidiary.

In 1857, Burlington and Missouri River Railroad connected to Ottumwa, Nebraska, followed by Murray in 1868. Using wood-burning locomotives and wooden passenger cars, it finally reached the Missouri River in November 1859.

A sub-branch of the railroad was founded in Nebraska in 1869, with rails first entering the state in 1870 at Plattsmouth. That summer, the railroad reached Lincoln, the recently designated state capital. It later continued to lay track westward, eventually joining with the Union Pacific Railroad on September 3, 1872, at Kearney. The railroad bridge into Kearney was used for 104 years, linking traffic from southern Nebraska to the rest of the continent. 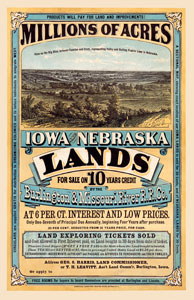 Millions of acres of land in Iowa and Nebraska.

That year it began advertising “millions of acres of cheap land” to incentivize prospective settlers to Iowa and Nebraska.

In an early forestation experiment, Chief Engineer Thomas Doane, in 1872, hired nurseryman Ezra F. Stephens of Crete to plant 750,000 trees along 100 miles of this line between Lincoln and Lowell to prevent snow drifts.

In 1872-73, thousands of trailed-in Texas Longhorns were shipped from Lowell, Nebraska on the line and sugar beets and prairie hay were also primary freight items.

During World War II, as many as 200 carloads of cement, steel, and Weeping Water limestone were carried to Nebraska for highway construction.

The 24-mile Kenesaw-Kearney segment of Burlington track carried its last train on November 3, 1976. Except for 1.8 miles of right-of-way, including the Platte bridges, designated as a Nebraska Game and Parks Commission hike-bike trail, the land was sold.

A historical marker was erected on the grade between Lowell and Newark, Nebraska.