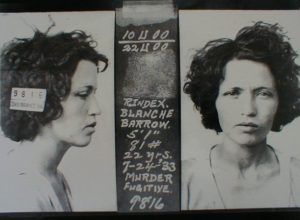 Bennie Iva “Blanche” Caldwell Barrow was the wife of Marvin “Buck” Barrow and a member of the Barrow Gang that was active during the early 1930s during the Great Depression.

Blanche was the only child of Matthew Fontain Caldwell and Lillain Bell Pond and was born in Garvin, Oklahoma on January 1, 1911.  When she was still very young, her parents divorced and she was raised by her father, who made his living as a logger, farmer, and minister. When she was 17 years old, her mother arranged for her to marry a much older man named John Callaway, who had money and promised to reward both Blanche and her mother. However, soon afterward Blanche ran away and while hiding from her arranged husband in Dallas County, Texas, she met Buck Barrow. Just a few days after meeting, Barrow was shot and captured following a burglary in Denton, Texas. He was sentenced to five years in the Texas State Prison System but escaped in March 1930.

On July 3, 1931, Blanche and Buck were married in Oklahoma and she soon began to accompany her husband on a number of armed robberies. However, she did not like the criminal life and along with other members of the Barrow family convinced Buck to turn himself in, which he did on December 27, 1931. He then resumed his sentence and was released on March 22, 1933. Upon his release, the couple joined up with Buck’s younger brother Clyde, Bonnie Parker, and W. D. Jones in Joplin, Missouri where he participated in several armed robberies. Though Blanche did not participate in the robberies, she was present during the gun battle in Joplin, Missouri on April 13, 1933, in which two law officers were killed. She was also present in the gunfight that occurred on July 19, 1933, at the Red Crown Tourist Court near Platte City, Missouri. Both Blanche and Buck were wounded but managed to escape with Bonnie, Clyde, and W. D. Jones. Escaping to Dexter, Iowa, they were pursued and another gun battle occurred on July 24th, in which Buck was wounded again. Both Buck and Blanche were captured, but Bonnie Parker, Clyde Barker, and W. D. Jones, all wounded, were able to escape. Buck died at Kings Daughters Hospital in Perry, Iowa on July 29, 1933, of complications involving from the wounds he received in the two gunfights. 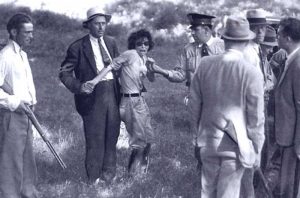 Blanche Barrow after her capture

Blanche was extradited to Platte County, Missouri to stand trial and was sentenced to ten years in the Missouri State Penitentiary. After serving six years she was released and moved to Dallas, Texas. In 1940, she remarried to a man named Eddie Frasure. Eddie died in 1969 and Blanche died from cancer on December 24, 1988. She was buried in Dallas’s in the Grove Hill Memorial Park in Dallas under the name “Blanche B. Frasure.”