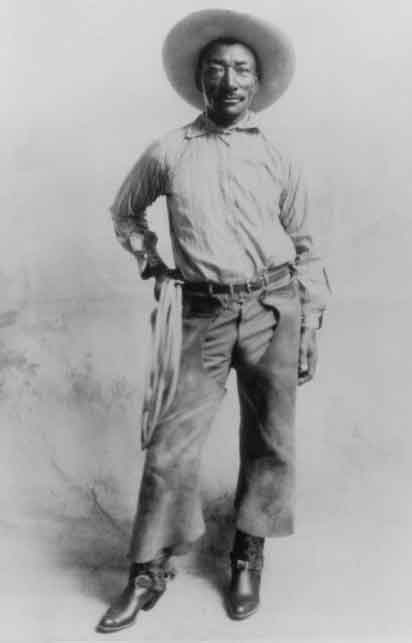 Bill Picket, circa 1902. Photo from the North Fort Worth Historical Society.

William Pickett, also known as Bill, Will, and Willie, was one of the first great rodeo cowboys and is credited with inventing the sport of bulldogging.

Of African American and Cherokee Indian descent, Pickett was born on December 5, 1870, in the Jenks-Branch community of Travis County, Texas. He was the second of 13 children born to Thomas Jefferson Pickett, a former slave, and Mary “Janie” Gilbert. As a child, Pickett attended school through the fifth grade and began working at ranching. 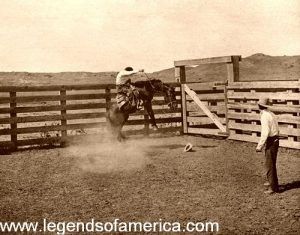 By the time he was 18, the family had moved to Taylor, Texas, where he and his brothers began a horse-breaking and “cowboy” service called Pickett Brothers Bronco Busters and Rough Riders Association. He married Maggie Turner, a former slave and daughter of a white plantation owner, two years later. The couple would eventually have nine children.

Credited with inventing the technique of bulldogging, the skill of grabbing cattle by the horns and wrestling them to the ground, Pickett began to supplement his income by demonstrating his bulldogging skills and other stunts at county fairs.

In 1905, he joined the 101 Ranch Wild West Show, which featured other notable western characters such as Buffalo Bill Cody, Will Rogers, Tom Mix, and others. He also became an employee of the 101 Ranch and soon moved his wife and children to Oklahoma. 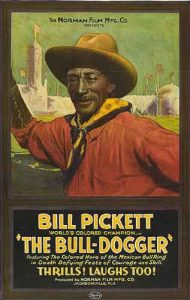 1920 Movie Poster from the film “The Bull-Dogger,” starring Bill Picket

The show toured around the world and appeared in early motion pictures. Unfortunately, during these times, he was sometimes banned from rodeos because of his black heritage and was forced to claim he was a full-blooded Indian to perform. Pickett continued to work until he was kicked in the head by a horse at the 101 Ranch. A few days later, he died of his injuries on April 2, 1932, and was buried north of Marland, Oklahoma.

In 1971, he became the first African-American honoree to be named to the National Cowboy Hall of Fame, and in 1989 was also honored in the Pro Rodeo Hall of Fame. During his lifetime, he was often known by the nicknames “The Dusky Demon” and “The Bull-Dogger,” and was billed as “the world’s colored champion” in “death-defying feats of courage and skill.”