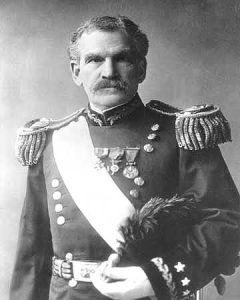 In what is now Coconino County, Arizona a column of the 6th Cavalry from Fort Whipple, Arizona led by Captain Adna R. Chaffee mauled a party of 54 White Mountain Apache led by Nantiatish on July 17, 1882. The warriors, aroused by the death of their medicine man, Nakaidoklini, the year before in the Battle of Cibecue Creek and resenting the intrusion of settlers and miners, had fled the White Mountain (Fort Apache) Reservation. They raided the San Carlos Agency, plundered settlements in the Tonto Basin, and for some time, evaded the 14 cavalry troops from various Arizona forts who were giving pursuit. Spying Chaffee’s force from the Mogollon Rim, the Indians planned an ambush in a canyon seven miles to the north. Chaffee, forewarned by scouts, dismounted and formed a skirmish line with part of his force at the brink of the canyon to pin down his opponents, on the opposite rim. He then deployed two parties that surprised them on the flanks.

The Battle of Big Dry Wash was the last battle fought between the Apache and army regulars. It was also one of the few times that army soldiers fought and bested the Apache in an actual battle because it was one of the few instances in which the Apache allowed themselves to be drawn into conventional battle.

The trail road from Mogollon Rim passes along Chaffee’s approach route and terminates at the canyon brink where the fighting began. A stone monument at the southern edge of the canyon describes the action and lists the names of the soldier participants. The heavy pine forests and rugged canyon are unchanged from 1882. A marker describing the battle is located at General Springs. The battlefield site is in the Coconino National Forest, on a rough trail road, about seven miles north of General Springs, which is located on Mogollon Rim Road. 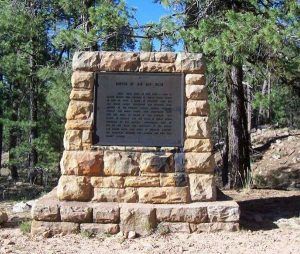