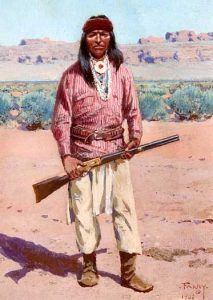 Occurring on the White Mountain Apache Reservation, the Battle of Cibecue took place on August 30, 1881. It was brought on by the influence of a shaman, Nock-ay-det-klinne, who preached a doctrine of raising the dead and removing the white interlopers from Arizona. Alarmed civilians and military personnel wanted the shaman arrested.

“After the medicine dances began around the post, I noticed a change. Generally, they [the scouts] are very ready to communicate anything they know or may have seen, but after these dances, they became very uncommunicative and would not tell anything that was going on among the other Indians or among themselves.” — Second Lieutenant Thomas Cruse, commanding Company A

After an army expedition of scouts and soldiers arrested the prominent medicine man and were taking the prisoner back to the fort, they were ambushed on Cibecue Creek by hostile Apache.

The Prophet, as he was called, was killed in the skirmish, as well as several soldiers under Colonel Eugene Asa Carr. Most of the soldier casualties resulted from the mutiny of most of the 23 Apache scouts, the largest such action in United States history. The soldiers then retreated to Fort Apache, and on the following day, the Apache mounted another attack.

The Cibecue affair touched off a general outbreak that saw Chiricahua and Warm Springs Apache such as Naiche, Juh, and Geronimo bolt the reservation and plunge Arizona, New Mexico, and northern Mexico into two years of turmoil.

The Cibecue battlefield is located in the village of Cibecue, Arizona. No marker denotes the site.