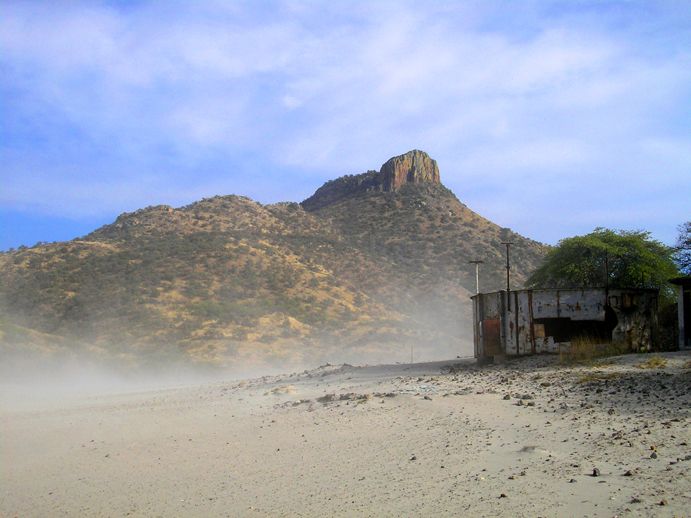 Dust fly’s from the mine tailings at Ruby, AZ. Photo by Kathy Weiser-Alexander.

Ruby, Arizona is one of the best-preserved ghost towns in the state, filled with history, including lawlessness, murder, and mayhem, not to mention dozens of great photographic opportunities.

In 2007, on our roundabout journey from Phoenix to Nogales, we took the road less traveled, exiting off of I-19 and eventually onto a dirt road adventure. Nestled below Montana Peak, rich minerals were first discovered here by the Spaniards who came through in the 1700s. However, not rich enough for their tastes, they performed only limited placer mining before moving on. The area remained undisturbed for nearly a century until two mining engineers by the names of Charles Poston and Henry Ehrenberg revived the old Spanish placers in Montana Gulch in 1854. Discovering rich veins of gold and silver, other prospectors followed, but mining remained limited primarily due to the hostile Apache inhabiting the area. 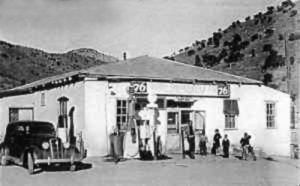 The Ruby Mercantile was first opened in the late 1880s by a man named George Cheney. In 1891, a large body of high-grade ore was discovered in the “Montana Mine” by J. W. Bogan and company, who pronounced the Montana Mine to be a veritable “bonanza.” When samples were assayed at eighty to ninety ounces of silver per ton, prospectors began to flood the region.

In 1897, the Ruby Mercantile was purchased by Julias Andrews. More than a decade later, Andrews applied for a post office, which opened in the store in April 1912. He named the post office, and effectively, the town — Ruby, for his wife, Lillie B. Ruby Andrews. 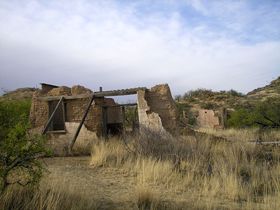 During Ruby’s early days, camp life was unglamorous and most of the miners lived in tents or adobe huts. There were no businesses other than the general store, which was the only lifeline for the miners. Most men relied on hunting to provide food for their families, but others would turn to cattle rustling.

In 1914, Andrews sold the store to Philip C. Clarke, who soon built a bigger and better one just up the hill, the remains of which still stand today.

Like most other early mining camps, Ruby had its share of lawlessness, but for this camp, so near the Mexican border, attacks by the town’s hostile neighbors were extremely common, so much so, that store owner Philip Clarke and his wife, Gypsy, kept weapons in every room of their house and store. In fact, Mr. Clarke felt that the town was so dangerous; he insisted that his wife travel to California to give birth to their son, Dan.

In the beginning, Ruby grew slowly due to its dangerous location and high cost of processing the ore, hampered by poor extraction methods and inadequate water. A dam was built to collect water runoff and several small operators worked the ore but it would be more than a decade before the rich minerals were worked in large quantities.

Though Ruby was growing, it was still a lawless place and finally, Philip Clarke became so concerned for his family’s safety that he moved them away to nearby Oro Blanco. However, he continued to work at the Ruby Mercantile, as well as amassing large amounts of land and cattle up until 1920 when he sold the store to brothers, John and Alexander Fraser.

Clarke warned them of the Mexican bandits who were prone to terrorizing the area, telling them to be sure to always be well-armed. But, for the Fraser brothers, the warning was not enough. Less than two months later, on February 27, 1920, they were found shot in the store. Authorities were immediately called and when they arrived they found Alexander Frazer lying dead near the cash register, with a bullet in his back and another in his head. Amazingly, his brother John was still alive with a shot through his left eye. However, he would also die five hours later, without ever regaining consciousness. 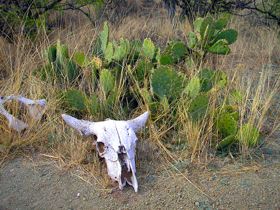 A cow skull sits in the ghost town of Ruby, AZ. Click for prints, downloads and products.

…tragedy is nothing new over there. In the wild and rugged region south from the Atascosa Mountains and the Bear Valley region, there has been always a harbor for a bunch of desperate characters, whose depredations have been felt by American cattlemen and ranchers through many years.”

Upon investigating, the authorities found that the telephone, the only one in Ruby, had been torn off the wall and its wires cut. The store and its post office had been robbed. Upon questioning neighbors it was found that two unknown Mexicans had been seen in the area and two sets footprints were found in the dust around the mercantile. That same night a prominent rancher in the area reported that two of his best saddle horses and eight head of cattle had been stolen. Believing that the two incidents might be connected, lawmen followed the cattle trail, searching in vain for the rustlers. In the months that followed a number of suspects were rounded up but no charges were made.

One investigator was told by an old-time local that there was a curse on the building. Explaining further, the local said: “Old Tio Pedro died years ago. He predicted evil for the occupants of the post office ‘cause it was built over an old padre’s grave.” The investigator confirmed the superstition with the local peace officer, who informed the investigator that, yes; the legend was common among the Mexicans of the area.