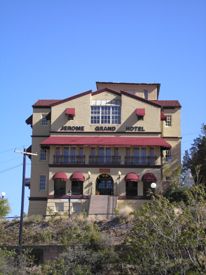 Perched above downtown Jerome high upon Cleopatra Hill is another haunted hotel – the Jerome Grand Hotel. Originally, this building served as the United Verde Hospital, opened in 1927. Constructed by the United Verde Copper Company for its many employees and their families, the hospital was a much-needed facility in a town that had grown to a population of some 15,000 people. A show-place building, it was the highest structure in the Verde Valley and was the last major building constructed in Jerome. Built to last, the structure was of a fire-proof design and could withstand the many nearby mining blasts of up to 260,000 pounds. While other area buildings crumbled or slid down steep slopes, caused by the mine blasting, that sometimes could be felt as far away as Camp Verde, the 30,000 square foot hospital wasn’t fazed. The building was an engineering marvel, even by today’s standards, as it was constructed on a 50-degree slope.

By 1930, the five-story Spanish Mission-style building and its facilities were written up as one of the most modern and well-equipped hospitals in Arizona. But, like the Copper Company itself, the hospital couldn’t survive once the copper deposits played out. The town’s people moved on to other opportunities and the hospital closed in 1950.

For the next 44 years, it stood abandoned; however, until 1971, it continued to be maintained, just in case it was needed in an emergency situation. Then, for the next two decades, it sat silent and neglected. But, in 1994, the building was purchased by the Altherr family from the Phelps Dodge Mining Corporation and the restoration to its current glory as the Jerome Grand Hotel began. All effort was given to maintaining the interior and exterior integrity of the historic building and in 1996 it reopened as the Jerome Grand Hotel.

Almost from the beginning, the building has had a history of hauntings, perhaps because of the many people who died there or the emotional trauma suffered by the many who were housed in its asylum. It is said to be one of the most haunted buildings in the state of Arizona, with a number of strange phenomena occurring over the decades.

Shortly after the hospital opened, both patents and staff began to tell stories of hearing people talking, coughing, moaning, and cries of distress coming from empty rooms. Some believed they may have possibly have been coming from some of the many lingering spirits who had died in the deathly flu epidemic in 1917. Though the hospital wasn’t even built at that time, perhaps these lost souls found the building, wishing that it had been there.

One of the first reports of a spectral soul was that of a woman dressed in white that began to be seen on a hospital balcony shortly after its opening. Thought to have been a nurse, the phantom lingered for years but apparently has moved on as she has not been seen since the building became a hotel.

One spirit that is has lurked in the building for many years is that of an old bearded miner. His “appearance” was first reported by a hospital patient who reported having seen the bearded man gliding down the hall, turning on all the lights on his way. Another nurse during the building’s hospital reign reported having seen a bearded man standing at the very end of a hallway. However, when she approached, him, the man mysteriously vanished. Today, guests of the hotel continue to report spying the ghostly vision of a bearded man, especially on the second and third floors.

Another spirit, just that of a small boy, described to be about six-years-old has also been spied on the third floor.

The phenomena described in the historic hotel includes all manner of strange occurrences including the sounds of phantom footsteps going up and down the stairs and hallways, doors that open and close of their own accord, objects that inexplicably move of their own will, and electrical appliances that turn on and off by themselves. Many of these bizarre happenings occur before the housekeeping staff, who have seemingly become favorite targets, sometimes hearing their names being called out by phantom voices. However, they say that the ghosts are accommodating enough, as when they ask them to stop, it does, at least for a few days.

The hotel lobby is an active place for many of the spirits. Here, the lobby doors have often been seen opening and closing by themselves, like someone is arriving or leaving; chairs have been rearranged while desk clerks turn their backs; items have flown off the shelves in the gift shop, as well as from the walls in the lobby. The lobby desk has also received a number of phone calls from empty rooms. It comes as no surprise when the line is picked up that no one is on the other end.

Near the old 1926 elevator, that is still operational, a finely dressed elderly woman in white has often been spied standing. 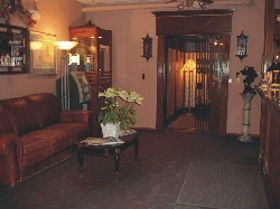 Inside the Grand Hotel

But, the most famous ghost of the hotel is that of a man named Claude Harvey, who was a hospital maintenance man in 1935. Harvey, who was well-known in Jerome, was more familiarly called “Scotty” by townsfolk who were shocked to hear about his death at the hospital. When Harvey’s body was found pinned under the elevator in the basement, his death was ruled an accident. Strangely, though, the inquest into his death determined that the elevator did not kill him. Some said perhaps he jumped to his death; but, the vast majority suspecting instead, that the man was murdered and his body dumped at the bottom of the elevator shaft. The elevator was found to have been in perfect working order and Harvey was an experienced maintenance man. Strange, that he was found beneath the elevator, with his neck broken and the only other mark on his body – a small scrape behind the ear. Rumors abounded with a number of theories and potential suspects, but the cause of death remained officially and “accident.” Almost immediately after his death; however, strange occurrences began in the building, especially in and around the elevator. Lights in the elevator shaft have been seen and the sound of the creaking elevator has long been heard, even when the building was vacant, no power was one, and even yet today, when it is unused.

Others have claimed to see the figure of a shadowy man in the basement, on the stairs, and near the elevator. The spectral man has been described as appearing furious. Others have simply “felt” an angry presence. Many speculate that Harvey has unfinished business here on earth, not resting until his murderer has been implicated. Though his spirit is said to make those who he encounters uncomfortable, Harvey has never hurt anyone.

Other spirits are also said to roam throughout the hotel, attributed to a number of tragic events in the building including a man in a wheelchair who fell from a balcony, a shooting, and a caretaker who hanged himself. A woman in white is sometimes been seen roaming the hallways and a small child has been seen running through the bar area.

Guests and staff continue to report being pushed in the hallways, doors that slam shut by themselves, the sounds of ghostly cries, and photographs that persistently develop with ghostly hazes and numerous orbs.

The Jerome Grand Hotel was featured in a segment of the popular Sightings television series several years ago and has been investigated by a number of ghost hunter groups who have reportedly recorded paranormal activity on film and audio.

Today the Jerome Grand Hotel currently provides 23 fully restored, modern rooms, with more rooms available in the future as the hotel continues to renovate. It is Jerome’s only full-service hotel with its own bar, restaurant, gift shop, and 24-hour front desk.