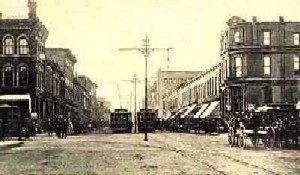 In the 1880’s Atchison, Kansas was a bustling Missouri River community of about 15,000 people. Reaching its peak population in that decade, many in the community felt that any existing law enforcement was too little or ineffective. As a result, a vigilante group called Good Intent was formed in 1883. Acting much like other vigilante committees, they quickly took the law into their own hands.

Three years later, in 1886, the group was reorganized with another existing group called the Central Protective Association, which was considered much more legitimate. One of their first acts was tracking down a thief who had stolen a team of horses and was finally captured in Nebraska.

Three years later, the group, unable to continue to bear the expense of tracking down outlaws, reorganized again, becoming the Atchison County Protective Association in the spring of 1889. With a number of influential members including bankers and county officials, the group grew to some 1,500 members.

Vigilantes in the Old West