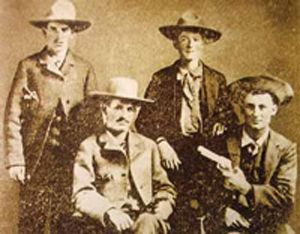 Albert Herndon was an outlaw member of the Sam Bass Gang who participated in the train robbery in Mesquite Springs, Texas.

After Sam Bass had little success in robbing smaller railroad lines, he decided to beef up his gang and go after larger railroads. To do this, he recruited several young farm boys from respectable families who were looking for adventure. Two of these lads were Dallas youths — Albert Herndon and Sam Pipes.

Albert G. Herndon was one of five sons of John W. and Mary E. McCommas Herndon. He had ever been in trouble before, other than some rowdiness that had caused some of the area folks to look at him as a little “wild.”

Though friends tried to dissuade him from joining in the train robbery, Herndon ignored them. On April 10, 1878, the gang held up a Texas & Pacific Railroad in Mesquite Springs, Texas, taking only $152. They missed a hidden shipment of $30,000 that was on board. Local lawmen and Texas Rangers began to pursue the gang aggressively, and both Albert Herndon and Sam Pipes were arrested by Texas Ranger, June Peak, on April 22nd and taken to the Dallas County Jail.

Both young boys were then convicted on July 17, 1878, of robbing the United States Mail, sentenced to life in prison, and first taken to prison in Austin, Texas. There, they were briefly cellmates with the infamous John Wesley Hardin. Later, both boys were transferred to Sing Sing Federal Prison in New York.

In 1886, a plague broke out in the prison population, and Herndon and Pipes volunteered to serve the prison population as nursing help when it became overrun with victims. As a result of their efforts, President Grover Cleveland granted complete pardons the same year. Both men returned to Dallas and on January 5, 1887. 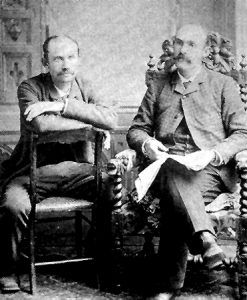 Sam Pipes, on the left, and Albert Henderson, on right shortly after they were released from prison.

Afterward, Albert Herndon disappeared into history. However, Sam Pipes married Sallie Caton Collins, the widow of Billy Collins, another Bass Gang member. Later, when Pipes worked as a bartender, he dropped a pistol that discharged, hitting him in the upper leg. He died a short time later, on February 16, 1889, from complications of the wound.

Highwaymen of the Railroads