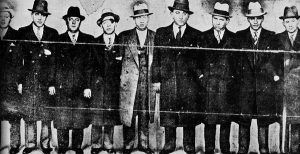 After the Castellammarese War ended in 1931, with both opposing bosses, Joe “The Boss” Masseria and Salvatore Maranzano ending up quite dead due to the treachery of Lucky Luciano, amongst others, Luciano, along with Jewish mobster mastermind Meyer Lansky, formed a nine-member National Crime Commission, which cut across ethnic lines. There was no single boss of this commission, but instead the leadership was divided equally amongst Luciano, Lansky, Lansky’s sidekick Benjamin “Bugsy” Siegel, Frank Costello, Joe Bonanno, Vincent Mangano, Joe “Adonis “Doto, Louis “Lepke” Buchalter, and his right-hand man Jacob “Gurrah” Shapiro. (Loose cannon Dutch Schultz – real name Arthur Flegenheimer – was not a member of the Commission for exactly that reason: he was a loose cannon and could not be trusted with making common sense decisions.)

Of course, all corporations need a separation of powers within that corporation, whereas certain people are given duties that do not infringe on the power and duties of other members of that organization. (Make no mistake, the National Crime Commission ran like a well-oiled machine, and indeed operated like an unregistered corporation)

This is where Murder Incorporated came into play. 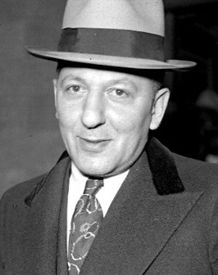 Louis “Lepke” Buchalter was put in charge of, what the press called Murder Inc., and to assist Lepke in his duties, the Commission appointed Albert Anastasia, nicknamed “The Lord High Executioner,” to be Lepke’s right-hand-man. Lepke would never give a direct order to any of his killers to do a job. Instead, Lepke used trusted men like Mendy Weiss and Louis Capone, to issue the final order and decree to the hit men chosen.

By keeping a level, or two, of insulation between himself and the actual killers, Lepke figured nothing could ever be directly pinned on him.

And at first, Lepke was right, until he made one fatal mistake.

The first order of business for Lepke and Anastasia was to assemble a crack hit team to do the actual dirty work. Through Louis Capone, who was close to Anastasia, Lepke had been nurturing a group of homicidal maniacs, some of whom would rather kill than breathe the cool fresh air of Brooklyn. These killers were called “The Boys from Brownsville.” The Boys from Brownsville were hardly the only killers employed by Murder Inc., but they were the foundation which led to as many as 100 freelance assassins being put on a steady weekly salary (of $125 and up), to be ready to kill whenever an order was given. These men were sometimes paid extra for a job especially well-done, and they were allowed to operate in designated territories in the gambling and loansharking businesses, or in any illegal operation, like hijackings, and even kidnappings. But one thing is for sure: even if a member of Murder Inc. didn’t kill anyone for a month, or two, or three, his killing salary came in steadily every week.

Now let’s get to the cast of characters of Murder Inc.

The first and foremost turned out to be the biggest headache for Lepke: Abe “Kid Twist” Reles. By eliminating the three Shapiro brothers, Meyer, Irving, and Willie, Reles along with his childhood pal Martin “Buggsy” Goldstein, took over all the illegal rackets in the Brownsville section of Brooklyn. To do so, Reles enlisted the help of Harry “Happy” Maione and Frank “Dasher ” Abbandando of the neighboring “Ocean Hill Hooligans.” Soon, such cutthroat killers like Harry “Pittsburgh Phil” Strauss, Vito Gurino, and “Blue Jaw” Magoon were taken into the fold, and the Boys from Brownsville were a formidable group of killers indeed. The key for their transition from Brownsville to the big time was Louis Capone, ostensibly a Brooklyn restaurateur, who was very close to Albert Anastasia. When Anastasia, along with Lepke, was entrusted by the Commission to form Murder Inc., Anastasia approached Capone and said, “What about Reles and his boys from Brownsville? Are these guys capable of doing what needs to be done? No questions asked.”

Capone assured Anastasia that Reles and his boys were stone-cold killers, and efficient ones at that. The only problem Capone had was that Reles and Maione, considered to be the number one and number two leaders of the group, hated each other’s guts; and they didn’t trust each other much either.

Despite their petty differences, Reles and Maione worked like a well-oiled killing machine. Under the direction of Anastasia and Capone, the Murder Inc. killers operated in such a manner that was almost foolproof. When assignments were given out by the bosses for killings all over the country, the arrangements were made in a way that detection of the actual killers was almost impossible. The key to their method was the concepts of corroboration and separation of powers. The bosses brought in several men to do different aspects of each job, with one man knowing nothing about the other men, and their involvement. Still, each man was so intimately involved in the operation, he would be considered an accomplice, and his possible corroborating testimony was useless in a court of law, in case he ever decided to turn rat.

For instance, let’s say Joe Schmoe from Illinois was next on Murder Inc.’s hit list. Murder Inc. would hire one man to steal an automobile for the getaway. Then another man would be directed to get as many guns as were needed for the job. Then there would be a third man, who would be the ‘finger-man”: the one who would point out Joe Schmoe to the actual shooters. Then of course, they needed a getaway driver, and a driver of a “crash car”: a legitimately registered car, that would crash into a pursuing police car, or the car of a nosy citizen, after the deed was done. The reason for the legit car was that the driver of the crash car could claim it was just an accident, while the shooters escaped in the stolen car. (For obvious reasons, it was not a smart idea to crash into a police car with a stolen car.)

The beauty of this routine was that each man involved in the murder would have limited knowledge of the other men involved in the hit. The man who stole the car would not know who purchased the guns, or who did the actual shooting, etc….etc….