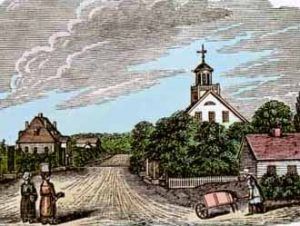 The Village of Zoar is a well-preserved early 19th-century communal village. Zoar was founded in 1817 by a group of German “Separatists” fleeing religious oppression from the Lutheran church in their native Wurttemberg, Germany. Leading the society was a man named Joseph Bimeler (also spelled Joseph Bäumeler), a pipemaker as well as a teacher. His charismatic leadership would carry the group through a number of crises.

Arriving in Philadelphia, Pennsylvania with few resources, the Quakers helped them to find jobs and eventually loaned them money to buy land in eastern Ohio. The loans were to be paid off by 1830. Sight unseen, the group purchased 5,500 acres of land in Ohio and then traveled west to their land, which was situated along the Tuscarawas River. They named their settlement Zoar, after the Biblical town to which Lot fled after fleeing Sodom.

The Zoarites held a number of important fundamental beliefs, including the fact that they were pacifists and refused to participate in war, which was one of the reasons that they had been persecuted back in Europe. They did not observe traditional religious sacraments such as baptism or marriage, rather, they chose to present themselves before witnesses without celebration.

Immediately, they began to construct the community’s first buildings. Soon, approximately 200 more separatists from Germany joined them along the Tuscarawas River in 1818. 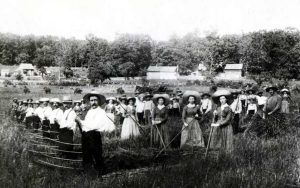 While they didn’t make plans to form a communal society, the harshness of the winter of 1818-1819 and their fears of ultimate demise, caused them to think differently. On April 19, 1919,  a meeting was held and the became the “Society of Separatists of Zoar.” As such, each member of the group agreed that their property and future earnings would become common stock in the society. Furthermore, both men and women had equal political rights in the community and all adult members signed the original document. In fact, women were not prohibited from holding office in the society, although no women were ever elected to these positions. In exchange, the society would provide for them.

Beginning in 1822, the community briefly experimented with a period of celibacy, as there was concern that the population might grow too rapidly for Zoar’s economic resources. The practice was abandoned in 1830. However, Zoar’s children, between the ages of three and fourteen, lived in separate nurseries from their families so that their mothers could continue to work in the community. As soon as they were old enough, they went to school, while at the same time, were expected to work for the society from a young age. 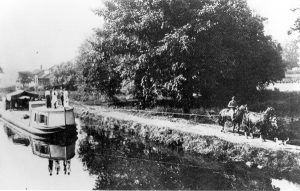 For the next several years, the Zoarites struggled to determine what products and services they could produce to pay off their loan to the Quakers. However, their worries were solved when the state of Ohio needed a right-of-way for building the Ohio and Erie Canal in 1825 and offered the society an opportunity to assist in digging the canals for money. The Zoarites agreed and for the next several years, spent their time building seven miles of the Ohio and Erie Canal, including four locks, just southwest of the village. When their work was completed in 1828 they earned $21,000, which allowed the society to settle its land debt, with money to spare.

The canal made a significant economic contribution to the village, providing a new outlet for the export of goods produced by the society. As the number of passengers and traders increased, the separatists of Zoar built the Canal Tavern and hotel. In addition to offering accommodations and food to Canal travelers, a blacksmith shop adjacent to the Tavern shoed the mules and horses that pulled the canal boats. 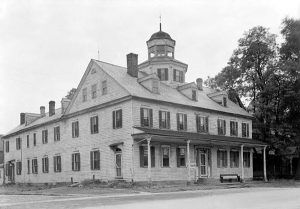 As travel on the Canal increased, and, in an effort to bring travelers into the village proper, the Society built the larger Zoar Hotel in 1833. The Zoar Hotel, with 40 sleeping rooms, was operated by the Zoarites for the next 65 years, Today the building still stands and is available for tours on certain dates.

At its height, the village contained a church, communal bakery, tin shop, blacksmith shop, furniture shop, weaving and sewing houses, a pottery, several mills, a brewery, several flour mills, a large ornamental garden with greenhouse, a town hall, a general store, and private and communal residences. Spacious barns and stables were set up on the outskirts of town. In addition, the society owned four canal boats. By the mid-19th century, the community had become self-sufficient and prosperous accumulating more than $1 million in assets. On August 31, 1853, the village leader, Joseph Bimeler died, leading to a slow decline in the cohesion of the village as the society’s original goals began to deteriorate. Over time, many of the original residents died and the younger generation didn’t have the memories of the persecution back in Germany, or the society’s early struggles. Further, the outside world influenced the community more and more. By 1898, the village voted to disband the communal society and the property was divided among the remaining residents.

Afterward, the town of Zoar continued to exist as a small community in rural eastern Ohio.

In 1969, most of the town was listed on the National Register of Historic Places. It was designated a National Historic Landmark District in 2016.

Today, The Ohio Central Connection (previously Historical Society) and the Zoar Community Association manage the historic district of four blocks square, which includes several dozen historic buildings, both publicly and privately owned, dating back to 1817. Several of the public buildings provide interpretive tours and demonstrations, bed and breakfasts inns operate, and seasonal festivals are held throughout the year.

The Zoar Historic District is roughly bounded by 5th, Foltz, and 1st Streets. Historic buildings are open for tours from April-October during the weekends and from Memorial Day to Labor Day, the village is also open Wednesday-Friday. There is a fee for admission. The Canal Tavern of Zoar today