The Eccles mine disaster was an explosion of coal-seam methane on April 28, 1914, in Eccles, West Virginia. The explosion took the lives of at least 180 men and boys.

Coal mining in West Virginia has always been a risky profession, especially before 1920, when laws had not been created to improve and monitor mine safety. During those years, working as a coal miner was an extremely unhealthy and dangerous occupation.

Mining accidents occurred from a variety of causes, including leaks of poisonous gases such as hydrogen sulfide or explosive natural gases, especially firedamp or methane, dust explosions, collapsing of mine stopes, mining-induced earthquakes, flooding, and general mechanical errors from improperly used or malfunctioning mining equipment, such as safety lamps or electrical equipment. The use of improper explosives underground also could cause methane and coal dust explosions. 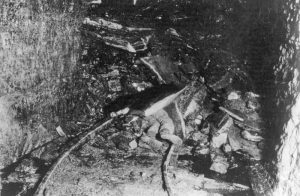 Other accidents occurred due to fire and smoke, cave-ins, snowslides, gas inhalation, and machinery/equipment failures such as cage falls, mine car and hoisting accidents, and others.

Once the miner was down to his working level, he contended with moving tram cars, steam lines, electric wiring, various types of machinery, and the heavy, hot, and massively vibrating drills. Supporting timber if poorly positioned, or if the wood became water-soaked and rotten, or with minor shifts in the earth’s crust, tons of rock would suddenly fall, trapping or crushing the miners.

Coal mines were often filled with odorless and tasteless methane gas. Canaries, birds that were sensitive to toxic gases such as carbon monoxide and methane, were used until the 1980s when handheld electronic detectors replaced them.

In general, early mine accidents were blamed on God or the carelessness of the miner. These attitudes on the part of the mine owners, the courts, and government agencies continued well into the 20th century. 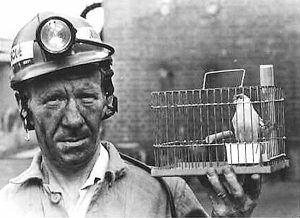 In 1883 the West Virginia Legislature passed the first law regarding coal mining in the state. The law provided a qualified mine inspector to be appointed by the governor who appointed Oscar A. Veazey.

His job required him to prepare an annual report on the number of mines, employees, and a summary of his activities. It also required the reporting of all mine fatalities and the names of the victims, which was completed in 1883. The following year, Veazey proposed the first comprehensive mine safety laws.

Since 1883, when fatality records began to be kept, more than 21,000 miners have lost their lives in the West Virginia coal mines. In the early years, most of these deaths were single fatalities, and many were not investigated. However, in 1883, when 20 miners lost their lives, the legislature established the West Virginia Department of Mines and appointed Oscar Veazey as the first mine inspector. That year the first Annual Report was prepared, and the following year, Veazey proposed the first comprehensive mine safety laws. However, nothing was enacted.

On January 21, 1886, West Virginia’s first significant mining accident occurred at the Mountain Brook mine in Newburg. The methane gas and dust explosion ignited by an open light killed 39 men and was classified as the first mining “disaster” in the state. This would be the first in a long line of “disasters” in the following years. 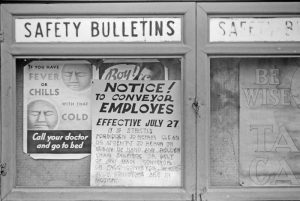 In 1887, the Legislature passed the first significant mine safety laws; however, they were not published until 1897.

In the next decade, coal production increased from slightly more than two million tons in 1883 to more than 11 million tons by  1894. That year, the United Mine Works went on strike in West Virginia.

The next disaster occurred in Standard, West Virginia, on November 20, 1894. When coal was blasted using a dangerous method called “shooting from the solid,” meaning that they blasted the coal loose without first undercutting it, eight men lost their lives. Just two years earlier, three men had been killed there in the same manner.

By 1900, coal production had doubled to more than 22 million tons. The boom ushered in a period of great danger. Three months into the 20th century, a miner’s open light ignited methane gas at the Red Ash mine in Fayette County on March 6, 1900. The resulting explosion killed 46 men, many of whom were descendants of slaves, who had been lured from the South by the promise of good jobs.

In the early 1900s, over 18 months, a mine worker’s chance of being crushed, asphyxiated, burned, blasted, drowned, or similarly maimed or killed was more than 100%. 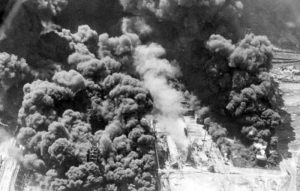 In 1905 the West Virginia Department of Mines was created. Two years later, a Mining Commission was appointed to propose new legislation. These laws were printed in the languages of the miners the same year. Though the laws were to improve and monitor mine safety, disasters would continue to occur.

Part of the problem was recruiting unskilled workers, including immigrants, who had never worked in the mines.

On January 29, 1907, at the Stuart Mine in Fayette County, an explosion was caused when an open light ignited gas. Occurring after disregarding safety rules, the explosion killed 85 men, most of whom were unskilled workers. 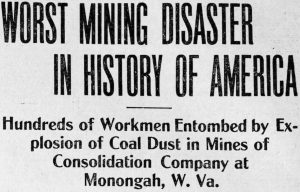 On December 6, 1907, the Fairmont Coal Company’s interconnected Number 6 and 8 mines at Monongah exploded, killing 361 miners, the worst coal mining disaster in U.S. history. People could feel the impacts from the explosions as far as eight miles away. Some people and animals were violently thrown by the force of the event, and many buildings were destroyed. To this day, officials aren’t sure of the cause. Many believe an equipment spark may have ignited dust or gasses in the air. Of those killed, only 74 were classified as “Americans.”

The resulting public outcry brought Congressional action, culminating in creating the U.S. Bureau of Mines in 1910. However, it would not be quick enough.

In that year, the largest number of major mine disaster events occurred in the United States. At this time, the Pullman Company made the first mine rescue railroad cars for the U.S. Bureau of Mines. These cars were former Pullman sleeping cars that were remodeled. The chief work of the car personnel was to investigate the cause of a mine disaster as quickly as possible, assist in the rescue of miners, and give first aid. 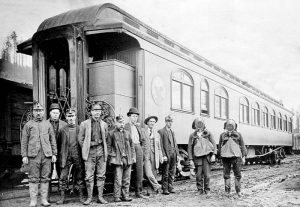 In the subsequent years, the cars continuously visited mining centers all over the nation to present demonstrations, lectures, and training. When a mine disaster occurred, the car was moved by a special locomotive or connected to the first train available.

In the first five years, 300 mine accidents, including explosions, fires, and cave-ins, were investigated, 230,000 attended lectures or demonstrations, 34,000 were given training in rescue and first-aid methods, and 11,700 training certificates were issued, increasing continuously from 509 in 1911 to 4,258 in 1915.

The second worst mine explosion in the state occurred on April 28, 1914, at the New River Collieries Company’s Number 5 mine in Eccles, West Virginia. The gas explosion occurred when a miner decided to eliminate a wall of coal to create a shortcut. However, the controlled explosion cut off ventilation to the mining areas, and an open flame headlamp or lantern ignited the buildup of methane gas, triggering a tremendous explosion. In the tragedy, 183 miners lost their lives, and many of the bodies were trapped in the rubble for four days. 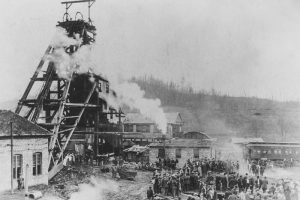 In the 1920s, new state and federal regulations and insistence for improved safety from the United Mine Workers began to create a safer environment. But disasters still occurred, some of them with significant losses of life. In 1924, the Benwood Mine in Marshall County exploded, killing 119. Three years later, the Federal No. 3 mine at Everettville blew up, killing 111.

On January 10, 1940, 91 died in a methane explosion at the Pond Creek No. 1 mine at Bartley, McDowell County, shattering any illusion that major mine disasters had become a thing of the past.

In the 1950s, ten disasters were added to the terrible total. Notable among these were two explosions at the Pocahontas Fuel Company’s No. 35 mine in Bishop in 1957 and 1958, killing a total of 59 miners. 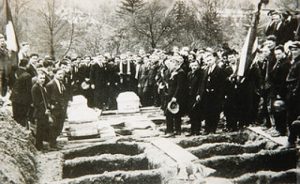 Burying the dead after the Benwood Mine Explosion.

In the early 1960s, fires, roof falls, and flooding took their toll, but it was nowhere near the numbers in previous years. For instance, a July 23, 1966 explosion at the Siltix Mine near Mount Hope killed seven miners, while 39 escaped.

But just two years later, another explosion occurred on November 20, 1968, when the vast Consolidated No. 9  mine at Farmington exploded, killing 78. Apparent that significant changes still needed to be made, Congress passed the Federal Coal Mine Health and Safety Act in 1969. West Virginia also tightened its rules and regulations. These changes at the state and federal levels finally made a major change in coal mine safety and significantly reduced mine disasters.

On July 22, 1972, at the Blacksville No. 1 mine in Monongalia County, a fire occurred while a continuous mining machine was moved to a new working section. Nine men working deep in the mine perished due to smoke and fumes that carried through the mine’s ventilation system. 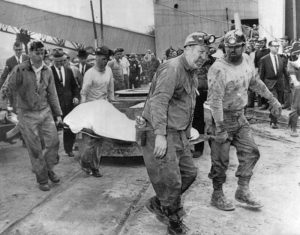 Twenty years later, on March 19, 1992, another disaster occurred at the Blacksville No. 1 Mine. By that time, the mine was closed was being sealed. When drainage pipes were welded together and placed into the production shaft, a spark fell into the shaft, igniting methane gas, and four miners were killed.

The last coal mining disaster occurred on April 5, 2010, at the Upper Big Branch Montcoal Eagle Mine in Naoma. The worst mine disaster in 40 years, the explosion killed 29 people.

To date, there have been 119 disasters at mines in West Virginia. Many more miners suffered disabling and lifelong injuries in nonfatal accidents.

Though the mining history in West Virginia is tragic, the state has furnished our nation and the world with the finest bituminous coal found anywhere. Today, the coal industry exhibits a sense of responsibility – social, health, safety, and environmental – that is unmatched anywhere in the world.

There are more people killed in farming accidents in the U.S. today than in coal mining accidents.