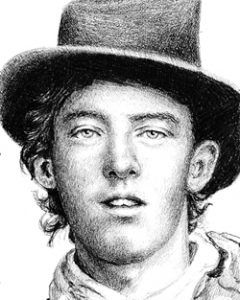 Emilio Estevez, Val Kilmer, Kris Kristofferson and even Paul Newman have played him in movies, of which there have been over fifty. Hundreds of books have been written about him, as well as songs and even a ballet composed in his honor. But who was Billy the Kid, really? Who was he outside of pop culture, according to those who knew him, rode with him? What would you make of him if you were to meet him today?

The first thing you’d likely notice would be his sunny disposition. Even when he was captured for the final time, with guns trained on him, a witness said, “There was Billy, cheerful and chattering, excitement lighting up his face.”

Later, during a newspaper interview, the reporter commented that Billy didn’t seem terribly worked up about his looming execution. Billy responded, “No sense in looking on the gloomy side of everything.”

When the crowd gathered around the stage that was transporting him to jail, clamoring to catch a glimpse of the infamous Kid, Billy placed his hands on the judge who had convicted him, saying “This is your man, right here.”

Frank Coe, who used to ride with him, said that Billy “found a touch of humor in everything.”

One thing that stands out after reading a lot of firsthand accounts is that Billy seemed to have a high energy level. He is described as having “dancing eyes” on more than one occasion. He was always constantly fiddling with his guns. He could twirl a pistol on both hands, spinning in opposite directions—a talent fueled, no doubt, by the fact that he was ambidextrous. Lily Klasner said, “The Kid was as active and graceful as a cat. At Seven Rivers he practiced continually with pistol or rifle, often riding at a run and dodging behind the side of his mount to fire, as the Apaches did.” After reading about his high energy levels and constant movement, I have to wonder if today’s doctors would diagnose him with ADHD.

Billy was also known for being a gentleman. George Coe said, “He was the center of attention everywhere he went, and though heavily armed, he seemed as gentlemanly as a college-bred youth. He quickly became acquainted with everyone and because of his humorous and pleasing personality grew to be a community favorite.”

Miguel Otero, who met Billy after his final capture, reported that he liked Billy very much. “Nothing would have pleased me more than to have witnessed his escape. He had his share of good qualities and was very pleasant. He had a reputation for being considerate of the old, the young, and the poor; he was loyal to his friends and above all, loved his mother devotedly.”

Frank Coe reports that Billy was “always in a good humor and ready to do a kind act for someone.”

All this might lead you to think Billy was popular with the ladies. To that, I say a resounding, “hell yes.” He was known to have a string of queridas (sweethearts) in every little village in New Mexico. He knew all the dances of the day and always attended them. Despite loving parties, Billy didn’t drink. When he’d ride into town, while his friends were getting liquored up, Billy would hang out at the McSween house. He’d belt out tunes while the local pastor’s wife played the piano. His old friend Frank Coe said, “In fact, Billy was so popular that there wasn’t enough of him to go around. He had a beautiful voice and sang like a bird.”

Lastly, Billy was a pretty intelligent guy. He worked out a deal with the governor of New Mexico and when you read their correspondence you’ll see his grasp of language is impressive (to say nothing of the penmanship). Especially when you consider he was a teenager at the time. As if that weren’t enough, he spoke Spanish as well as a native speaker. Many of his friends were married to Hispanic women and Billy would step in and translate when needed.

Billy also loved reading. According to Frank Coe, “Billy got to be quite a reader. He would scarcely have dishes washed until he would be sprawled out somewhere reading a book.”

Billy liked dime novels and one of his favorites was early science fiction pioneer, Jules Verne. Pat Garrett had this to say: “Billy always had his eyes to the future. It’s why he was so good as escaping. He kept one step ahead of you all the time.”

I have to wonder what Billy would make of this future—where he somehow became a household name. I think those dancing eyes would light up and he’d throw back his head and laugh. But I’m realistic. I know he’d probably sneak off before we’d really have a chance to talk.

About the Author: Terri Meeker is an author and ex-history teacher. She got to speculating so much about what Billy might think of this modern age that she wrote a book. You can get it at Amazon or connect with her on her website. Drop her a line! She loves to talk about Billy until the cows come home. Her patient family will attest to this. 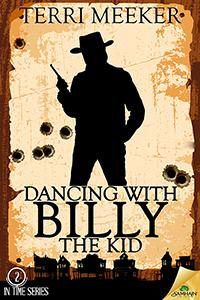 “Dancing with Billy the Kid (In Time)”, by Terri Meeker.