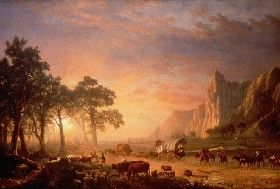 Told by an old settler in Jefferson County, Nebraska

In the late 1860s, my wife and I, with our bunch of towheaded youngsters, were headed westward, traveling by ox-team in a canvas-topped wagon bound for Nebraska, in response to the solicitations of my father, who had settled there a few years previously. Crossing the Missouri River in the early days of spring, at St. Joseph, Missouri we joined one of the first caravans of emigrants going westward over the Old Oregon Trail. Traveling over the wonderful prairies and through the rich valleys of eastern Kansas, we had our ideas of the Great American Desert rudely but pleasantly shattered. In due time, we reached our destination and encamped on the tract of land that had been selected for us, which was a well-timbered and watered body of land, lying along a spring-fed stream, that ran back into a valley which was flanked by bluffs capped by ledges of sandstone.

As the first tints of green began to appear in the landscape it was a wonderful sight to witness the unfolding of such picturesque scenery, the likes of which we had never seen before.

Our new home lay about half-way between the Old Oregon Trail and the Little Blue River, but this is all I will tell you, for ghosts and their haunts should not be too definitely located, as it might spoil their charms or veracity if there be any.

We immediately commenced the building of a home, and, with the aid of my relatives and neighbors, contrived to erect a habitable log cabin, a one-room affair with a loft above, a clapboard roof, mud-and-stick chimney, and a stone fireplace at one end.

Compared with our previous places of habitation and modes of living, this seemed, at first, to be very primitive and almost unendurable, but before long we grew to regard this homely little log cabin as the coziest place it had been our pleasure to reside in. 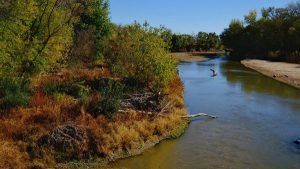 With the coming of the warm days of spring, we broke out the little flats of land along the creek bottom and planted them with corn, potatoes, melons, etc. Gardens were made, and we entered into the cultivation of our promising crops, hoping to reap an abundance of our needs. Nature had by now fully bedecked the whole panorama with a wonderful profusion of foliage, blossom, and color. Our little world seemed to be filled to overflowing with promise and happiness. Strawberry-time had come. The hillsides were covered with the patches of this red luscious fruit. One Sunday morning, my wife and I, light of heart, arm in arm, set out to roam the hillsides to gather a pail full of strawberries. We were soon in the midst of a profusion of strawberries, so plentiful, full and ripe on all sides of us, that we ran here and there, trampling underfoot many berries, in our greed to secure the nicest ones.

Our pail was soon full to the brim, and our fingers and lips stained from picking and eating, until we were so full we had to stop. Then, feeling the tire of contented satisfaction, we sat down upon a convenient rock, lazily viewing the surrounding scenery, resting before we would attempt our home-bound journey. With half-closed eyes lying back on the big shaded ledge of stone, my thoughts were dwelling on the incidents of the short past, in which we had left the comforts of civilization and had taken up our abode in this the land of promise, thinking how content we were. Just as I began to conjecture the future, I was aroused by an exclamation by my wife, who was now pointing across the rock-walled ravine to a springy spot, shaded by scattered clumps of underbrush. Brushing aside the sleepy tangles of my eyes, I noted the cause of her excitement, which I first thought might be Indians. Underneath and in the tangles of leaf and stem, quite in contrast to the rich background of green, were berries — strawberries of great size and blood-red color, rivaling even the choicest of the same ones we had seen in the gardens of our Eastern homes.

Leaving our already filled pail, we hastened over to view the wonderful sight. Picking and eating the first few that we came to, we decided to take some home in my old hat and in the wife’s apron; so, with many noises of wonder and surprise, we filled these articles. As I strode through a thick tangle of brush in leaving the patch, my foot caught on an object which threw me to the ground, and on turning over, I found at my feet, the skull of a human being. Leaping up, I rushed out of the thicket almost completely unnerved at my ghastly find. My wife, who had witnessed my stumble and quick leap up, ran back towards me, inquiring with alarm, the cause of these unusual actions. Together we walked back, and I pointed to the eyeless bare skull that was apparently grinning at us from his moldy moss-covered retreat from which my foot had ruthlessly torn him but a moment before. 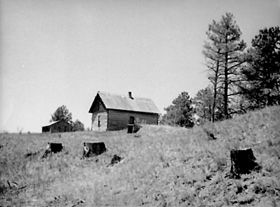 Proceeding into the thicket to investigate more fully, we found that underneath the leafy and molding foliages of the past seasons which had covered their bodies, were the bones of many other persons. In fact, our strawberry patch had been the burial-ground of the unknown dead. My wife and I, stilled by the presence of the dead, stood with bowed heads and silently offered up prayers to Him on high, who alone could give the solution of this mystery.

Glancing up, I met the gaze of my wife, and overturned my old hat was overturned as the corners of her apron were dropped and the berries spilled on the ground. For we both knew without further questioning, what had caused the berries to be so big and red.

Then, we made a thorough search thereabout for the bones of the unknown dead, faithfully gathering the bones as they lay, endeavoring to give each skull its own and a full complement of bones. Finally, we felt that this duty had been performed, and the result was twelve skeletons, which we judged were a party of emigrants of men, women, and children.

After considerable labor, a grave was dug, the bones placed within, and filled up with earth and stones covering the top to mark and protect the grave. Thoroughly tired by our toil, we wended our way homeward, conscious that we had fulfilled our duty to those poor unfortunate beings by giving them at least a burial. After supper we gathered on the doorstep in the twilight of the evening, feeling content and at peace, when there came an uncanny, weird moan or cry, like that of woman or child in the depth of anguish or despair. Listening in awe, I awaited the repetition of that mournful sound. Soon it came, now in the fringe of trees about the cabin, then in the waist-high corn. Swiftly recalling the incidents of the day, I tried to assure myself that it was not real, that this was but the result of a befuddled mind, just imagination; but the children were now questioning us as to the cry, and upon receiving non-committal answers, and perhaps reading our faces, they grew frightened and began to cry.