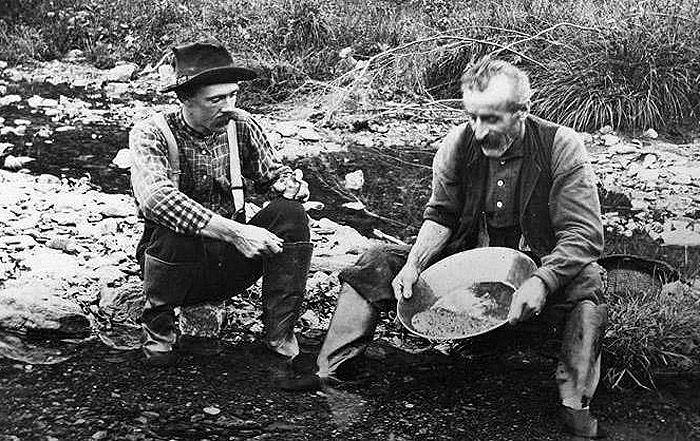 The first reports of gold in Vermont surfaced in 1845 when the State Geologist, C.B. Adam, reported in the First Annual Report on the Geology of Vermont that gold had been found in the town of Somerset. This statement, however, was downplayed and stirred little interest.

Gold was again found about one mile west of Bridgewater in Dailey Hollow by Mathew Kennedy in 1851. This property later came to be known as the “Taggart Vein” and was worked intermittently for a few years until about 1859. But, more money was spent on getting the gold out of the area than was ever regained in the value of metal extracted.

In 1854, Dr. C. T. Jackson of Boston, Massachusetts reported that a mine containing gold, silver, lead, and copper was opened in Bridgewater, Vermont. In this mine was found as small irregular grains in quartz. He would later say that the so-called great Appalachian gold belt passed through both Plymouth and Bridgewater. 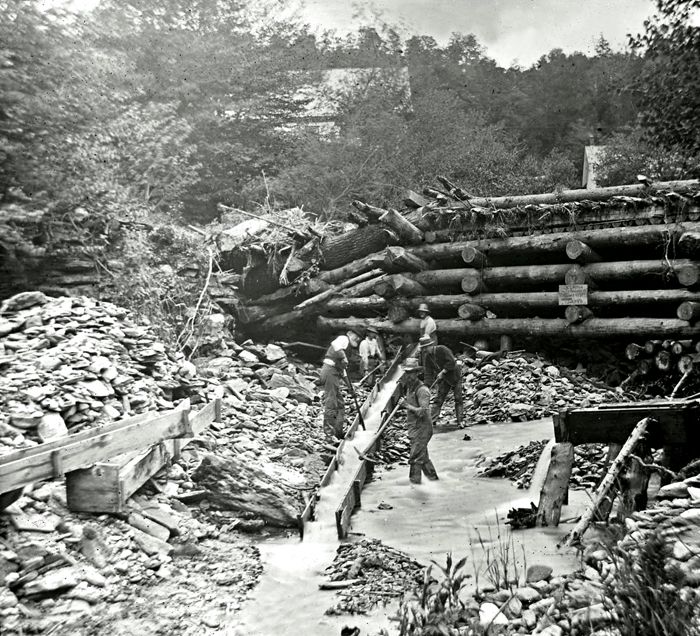 In 1855 Captain Abial Slayton, a ’49’er who had just returned from the California Goldrush, discovered gold in Vermont. Slayton who had struck it rich on his California gold claim found gold in what was then called Hull’s Brook in Stowe. The stream was later renamed Gold Brook. Upon his discovery, Slayton set up a sluicing operation and employed several men to work the find. Although this gold discovery never produced very much gold throughout the years, enough was hauled out to coat the last spike of the Mount Mansfield Electric Railroad in 1887.

Gold in placer deposits in Plymouth in 1855 and following years, were said to have yielded about $300 per year. The gold found in these areas assayed as some of the purest natural gold in the world, near 23.5 karats, which was a higher figure than nearly all of the famous gold regions in the United States. Most gold nuggets assay in the range of 18k to 20k.

These discoveries spurred a flurry of speculative investment, mine blasting, and sluicing. Gold was found in the gravels of Reading Pond Brook and its tributary, Buffalo Brook; in Kingdom Brook, and in other streams in the vicinity of Plymouth Five Corners. During this time, future president Calvin Coolidge, who was born and grew up in the nearby town of Plymouth, even worked as a miner as a young man. 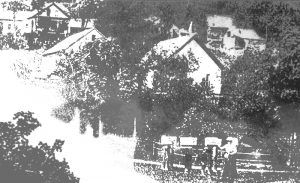 At Five Corners, in the years 1858 and 1859, William Hankerson was reported to have washed several hundred dollars worth of gold from the sediment in the bottom of a mill pond and during this same time, about $7,000 worth was estimated to have been washed in the town. Hankerson’s find sparked the famous but short-lived Vermont Gold Rush that caused a large influx of people into the small farming village.

Five Corners was soon bustling with the Plymouth Gold Mining Company, a quartz mill, a sawmill, a gristmill, a schoolhouse, a boarding house, hotels, a post office, general stores, saloons, a dance hall, and several other businesses. Unfortunately, though the miners avidly searched they never found the source of the gold and the town died as quickly as it was born. Today, there is nothing left of the ghost town but stone-lined cellar holes where buildings used to stand and footpaths used by today’s gold panners in the area. However, the town’s old cemetery still exists. 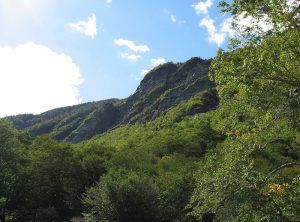 Copies of 1861 maps show thick gold lines along the spine of the Green Mountains, with a few areas of higher concentration in the Plymouth and Bridgewater areas, east of Killington Peak.

In the second half of the 19th century, south-central Vermont was home to a boom of mining activity. At one point, there were over 100 people working as miners in the Bridgewater area, and by some accounts, Vermont was called home to some 40-50 mines.

The Rooks Mine, southeast of Plymouth, was established in 1882 and became the largest gold mining venture in the state. The company was formed by Anthony Blum, New York shoe store owner; a government agent named Charles Rooks, Colonel Babcock, a New York City promotor; and an assayer named Henry Fox. Though Fox had no experience, he had great faith and was made the Superintendent of the mine. The company operations were ambitious and the first gold was produced in 1883. The company used rollers turned by an engine to crush the roasted ore, and quicksilver and sulfuric acid to extract the gold. Ore cars were pulled by horses to bring the ore out of the mountain on railroad tracks. 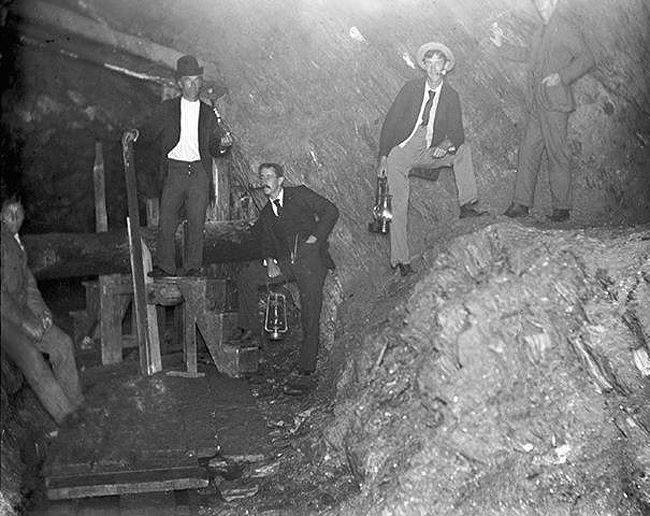 As with many of the other mines, stock in the company was aggressively sold and the Rooks Mining Company circulated impressive and convincing reports that noted nuggets found that worth as much as $31. The net value of the mine was estimated at $1,535,274 with daily earnings at $2,104.16 or $13.12 per share, a 131% return on capital investment. As a result of these reports, stocks changed hands quickly and Boston interests bought heavily.

In response, the San Francisco Journal lifted an eyebrow, stating that they had never heard of mining in Vermont and added: “the famed Kentuck mine in Nevada will pay but ten cents, or a total of $3,000 in the same month.”

At the time, there was speculation that the gold nuggets may have been faked, but other accounts insisted they were real. Either way, the mine was most definitely overpromoted.

Soon, plans were made by the board of directors to quadruple the capacity of the mill. The old machinery was removed while Superintendent Henry Fox waited for three years for the new equipment to arrive. In the meantime, he had been buying stock in the company and owned a few thousand dollars worth. In the end, the new equipment never arrived and Fox was forced to sue the company for his back salary. In 1887, the Rooks Mining Company declared bankruptcy and Henry Fox bought the mine and property at a Sheriff’s sale’ at Ludlow for $12,500. He spent the next 30 years as a hermit mine owner living in one of the remaining buildings. During this time, he sold off the rest of the buildings while he continued to search for gold. He died a pauper in May 1919 at the age of 70.

Today, just a few remains of old Rooks Mine, now called the Fox Mine, can be found in Camp Plymouth State Park, including mine shafts, building foundations, railroad ties, and rusty rails. 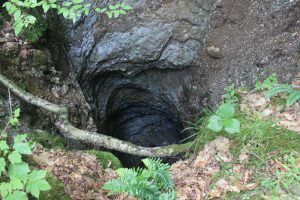 After the last venture of the Fox Mine, the Vermont State Geologist determined that while gold was present in the state, it did not occur in paying quantities. In 1900, he stated:

“. . . it is therefore useless to spend time and money in trying to find a fortune in gold mining in Vermont. Considerable money has been lost because it was invested in such mining, but I have yet to hear of much that was made in this way in this state. Occasionally a little ‘pay dirt’ has been found, but in a short time the promising mine has been left unworked.”

Later geological reports echoed this view, with one stating in 1930:

“Again, let me say that in my opinion, it is entirely useless to throw away money, time and labor seeking gold in Vermont.”

Investors and prospectors finally got the message and no more mines were developed in Vermont as there were no deposits large enough to make enough money to pay for the labor equipment.

However, placer deposits are still found in stream beds and the hillside gravels today and hobbyists continue to enjoy gold panning. Sluicing in Vermont’s waterways requires a permit. Experienced gold hunters say that the key to prospecting is knowing where to look, such as along the sides of creeks, pebbly beaches on waterways, and in the bends of rivers.

The most well-known site is Buffalo Brook in Plymouth, but the entire area around Plymouth and Bridgewater, especially along the Ottauquechee River, is also popular. 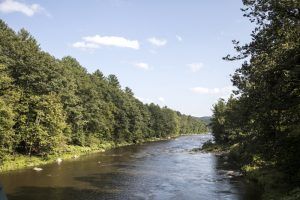 Gold has also been found at these locations in Vermont: 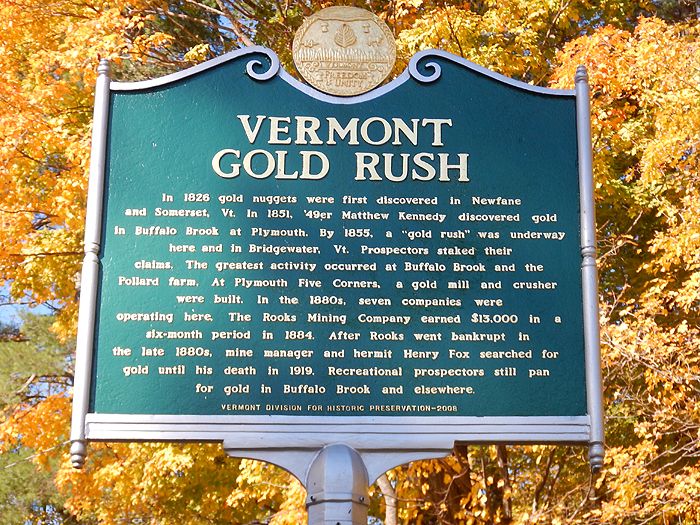 Mines & Mining on the American Frontier