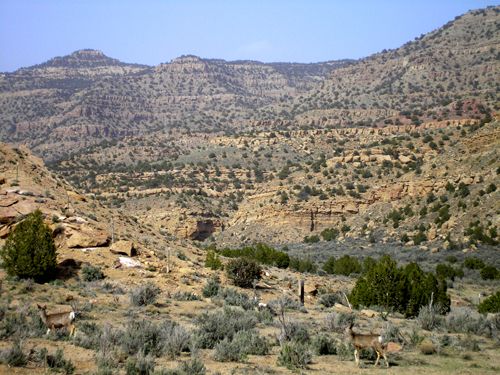 Located north of Thompson Springs, Utah is Sego Canyon, also known as Book Cliffs and Thompson Wash. This side trip off of I-70 west of the Utah/Colorado line provides not only a peek at prehistoric rock-art, but also the remains of the old coal town of Sego, a once-thriving coal mining camp.

About 3 ½ miles north of Thompson Springs, on Sego Canyon Road, are the petroglyphs and pictographs left by several different cultures. The Fremont culture thrived from A.D. 600 to 1250 and was contemporary with the Anasazi culture of the Four Corners area. There is also rock art from the Archaic period dating from 7000 B.C., the Barrier Canyon period from around 2000 B.C., and the Ute tribe dating from A.D. 1300.

Though preservation and restoration efforts are continual, unfortunately, there is quite a bit of graffiti and damage to the art. 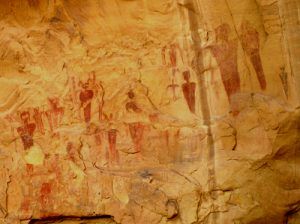 Barrier Style rock art is estimated to date back to about 2000 B.C. It is distinctive in life-size mummy-like human shapes without arms or legs, Kathy Weiser-Alexander. 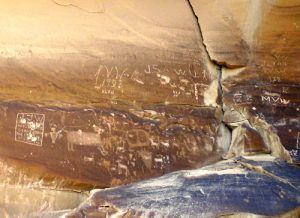 More Native American designs can be seen amongst the later graffiti caused by ‘later societies’ by Kathy Weiser Alexander.

After viewing the historic rock art, head north on Sego Canyon Road. After about ½ mile, the road forks, with the left fork headed into Thompson Canyon, and the right fork heading into Sego Canyon. Take the right fork, which quickly leads to Sego’s old cemetery. The ghost town of Sego is about another mile or so on up the canyon. 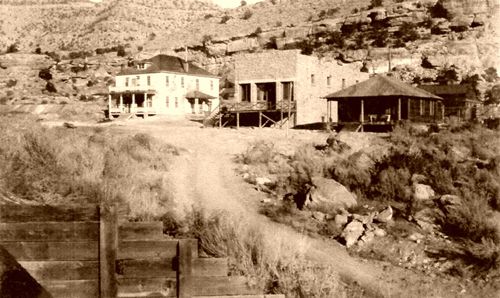 Sego got its start in the early 1890s when an affluent farmer/rancher named Harry Ballard discovered coal on land adjacent to his ranch. Keeping his discovery a secret, he began to buy the adjacent property and started coal operations on a small scale.

The small community that sprang up around the operations was first called Ballard, for its owner. The coal was initially dug out manually and hauled down the narrow canyon by wagons. Soon, news of the high-quality coal in Sego Canyon reached Salt Lake City. When a hardware store owner named B.F. Bauer heard of the find, he bought out Ballard’s property and formed the American Fuel Company, selling stock valued at $1 million. 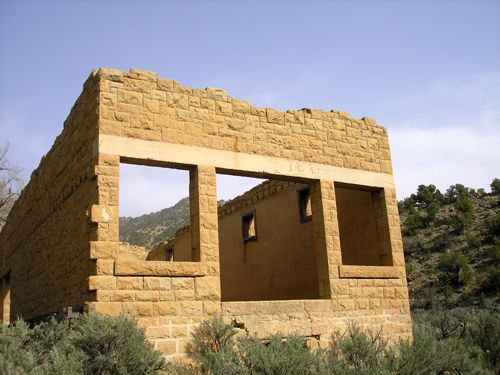 In 1911, the company began to develop the area in earnest with aggressive plans for long-term coal production. They built the American Fuel Company Store, a boarding house, mining buildings, the first coal washer west of the Mississippi River, and a tipple.

They also renamed the settlement Neslin, for the general manager of the American Fuel Company, Richard Neslin.

In 1914, the Denver and Rio Grande Western Railroad built a spur line from Thompson to the coal camp, which crossed the stream 13 times in its five-mile journey. Almost immediately, the camp was plagued with water problems, which continued throughout the life of the camp. On numerous occasions, the water table was so low; the coal washer could not be operated. The camp also experienced problems with the railroad spur trains, which were often off their tracks.

By 1916, the primary investor, B.F. Bauer, was not happy with the low profits and fired the general manager, Richard Neslin. The town’s name was then renamed Sego, for the state flower of Utah and the mine’s name was changed to the Chesterfield Company. Up until 1927, the camp had supplied its own power for mine operations, which also created numerous problems with break downs. That year, they secured electricity from Columbia, Utah, some 100 miles away at a cost of more than $100,000, placing more financial strain on the company. At times, the company was unable to make the payroll and paid their miners in scrip, which could be spent at the company store. 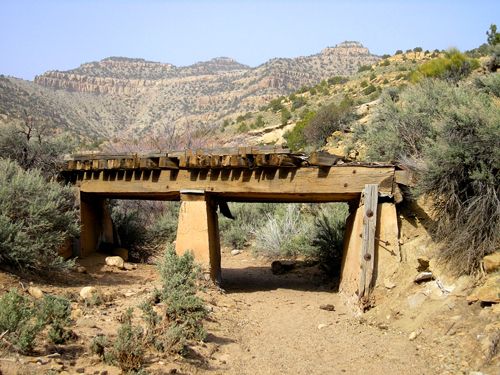 The financial problems finally got so bad, that the miners reorganized under the United Mine Workers Union in 1933 and with the union’s help, were finally paid regularly. At its peak, the mine employed about 125 miners and the town supported about 500 people.

In 1947, the company’s financial struggles came to a head, when the mine was ordered closed and the property offered for sale at a Sheriff’s auction in Moab, Utah. By that time, only 27 miners were employed, many of whom had worked at the mine for decades and were devastated. The remaining miners agreed to pool their money and make a bid. They were successful when they were able to purchase the equipment and property for $30,010. They changed the name to the Utah Grand Coal Company and once again began operations. However, tragedy struck in 1949, when a fire burned the tipple, drastically decreasing production. That same year, the railroad ceased operations to Sego, which required the new company to purchase dump trucks, and loading ramps, as well as building a new tipple. But, the employee-owned company persevered and recovered.

However, there was nothing they could do about the final blow, when in the early 1950s, the railroad began to use diesel engines, replacing the coal-powered steam engines and reducing the need for the mine’s products.  In 1955, the Utah Grand Coal Company sold all its holdings for $25,000, to a Texas based company who had no interest in the coal mines, but rather in the 700 acres of land that showed promise for both oil and natural gas. At that time, some of the buildings were then moved to Moab and Sego became an official ghost town.

For several decades, the canyon was still lined with many homes and buildings, but in the spring of 1973, nature’s worst enemy — people — destroyed much of what was left. On that terrible day, two carloads of treasure hunters were seen searching the old town with metal detectors. Unfortunately, later in the day, many of the buildings lay in smoldering ruins, as the treasure hunters sifted through the cooling ashes. Very sad that the greed of a few destroyed much of what was left of this old mining camp. 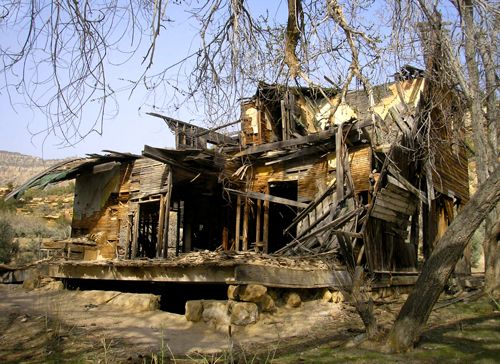 The American Boarding House looks like it could totally collapse any day, Kathy Weiser-Alexander. Today, this building has completely collapsed.

Today, the old site continues to display numerous signs of its prosperous past. The stone walls of the old American Fuel Company Store continue to stand, though its windows and roof are long gone. Nearby, are the walls of another stone building, as well as the two-story, crumbling wood “American” boarding house (We were told all that’s left is a pile of wood as of 2011).

Throughout the canyon can be found numerous other crumbling structures, mine shafts, foundations, and the old railroad bridges that crossed the creek. The cemetery provides an overgrown look at the past in its few marked and unmarked headstones.

The drive into the canyon requires a high clearance vehicle and should never be attempted if storms are expected, as flash floods are common. During recent rains, a 4-wheel drive is recommended to navigate rocky and muddy roads.

The exit to Sego Canyon is 25 miles east of Green River, Utah on I-70. Take exit 187 and drive north on the main road through the town of Thompson Springs. The rock art is located 3 ½ miles north. Beyond the rock art, the road continues about ½ mile before it comes to a fork, with the left fork heading into Thompson Canyon, and the right, towards the Sego Cemetery. The ghost town of Sego is about a mile north of the cemetery.

Please respect the town of Sego and its structures, as well as the native American rock art, as all are on private property. Your respect will guarantee that future visitors will be able to continue to see these historic remains.

Thompson Springs – Dying in the Desert