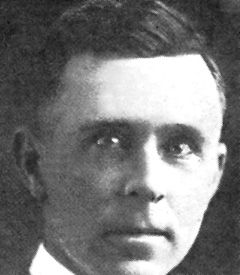 Although the Rangers proved a stabilizing force and compelled many undesirables to once again, leave town, Borger’s wave of crime and violence would continue intermittently into the early 1930s. In the meantime, Texas Governor Moody appointed a new District Attorney to the area in 1928. John A. Holmes was tasked with investigating and prosecuting the many criminals who had infested Borger and the surrounding oil fields. Though Holmes was threatened by gangsters on a number of occasions, he relentlessly continued his probe of crime and corruption in Borger. Just as Holmes was making final preparations to appear before the Hutchinson County grand jury at Stinnett, he was shot down by an unknown assassin on September 13, 1929.

The Holmes slaying was the last straw for Governor Moody. Forty-eight hours after the murder, the Texas Rangers were back in Borger. Two weeks later, the Texas Rangers were joined by the 56th Cavalry of the Texas National Guard. At about 8:30 a.m. on Monday, September 30th, a train of baggage cars, three Pullmans, and freighters pulled into Borger, where ten Texas Rangers were already in place. On that day, martial law was declared for Hutchinson County and the Texas Rangers and the National Guard were tasked by ridding the lawless town and the surrounding area of its criminal elements once and for all. Led by General Jacob F. Wolters, who had earlier been in charge of another city shut down by martial law, the troops disembarked, having an immediate effect on the town. Later, General Wolters would write:

In every situation where military authority is used to aid the civil power things occur that have either a good or a bad psychological effect. They are, in common parlance, the ‘breaks’ of the game. We had just such a break at Borger. Within one minute after the troops had detrained, a drunk man approached one of the guards. He was promptly put under arrest. This occurrence, in the presence of spectators, had a good psychological effect, however minor the incident was.”

Detachments of officers and soldiers were immediately sent sent to city hall where Wolter’s provost marshal, Colonel Louis S. Davidson, took possession and disarmed all the local lawmen. Another detail drove to Stinnett, the county seat, and removed Sheriff Joe Ownbey and disarmed all of the sheriffs’ department personnel. MPs were stationed at all city street intersections in Borger and patrols were sent throughout the city. Members of the police force and constables were disarmed, their uniforms and badges were taken away. City offices, and all records, books and papers of the city of Borger fell under the authority of Provost Marshal. Within hours of his arrival, General Wolters had complete control of the city and county. “Sundown” orders were issued to every person in the city, man and woman alike, and all “undesirables” were order to get out of town immediately.

A military court of inquiry was quickly established and over the next days and weeks, scores of witnesses gave testimony which officials hoped would result in the conviction of alleged leaders in the county’s underworld. By October 10, there were 17 members of the organized criminal ring behind bars. These included Dick Herwig and his henchmen.

On October 5th a committee of citizens called on General Wolters to ask what he required to end martial law. He responded by advising the citizens that he would demand the resignation of the sheriff and all his deputies, the two constables and their deputies, the mayor, the city commission, and all members of the police department. Mayor Glen Pace and Sheriff Joe Ownbey tried some stalling tactics, but, after deliberations involving the district judge and grand jury, all gave in and resigned by mid October. 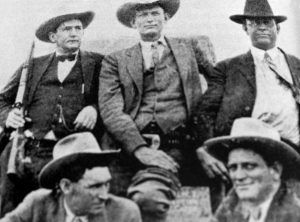 In the meantime, the Texas Rangers were busy closing every illegal still and saloon, confiscating whiskey and beer, and making arrests. Soldiers were searching for any weapons, and raids were conducted 24 hours a day. Finally, on October 18th, Governor Moody withdrew the military from Borger, and 11 days later, he formally lifted martial law. He granted Texas Ranger, Charles O. Moore a leave of absence for a year to serve as Hutchinson County Sheriff; another ranger would serve as the Chief of Police, and a new District Attorney was appointed.

Sam Jones, a former deputy constable of Borger, and Jim Hodges, a Borger boilermaker, were both indicted for murder in the death of John A. Holmes. They also were charged with bootlegging, and Jones faced a federal count of conspiracy to violate the National Prohibition Act. Jones was released from jail on bonds totaling $20,000, but he and Hodges never were brought to trial on the murder charges. On Oct. 26, 1945, the state dismissed the murder charges “because in the opinion of the state’s attorney, the evidence is insufficient to warrant the probability of a conviction.” The case was never solved. 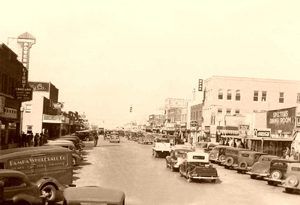 Borger did finally settle down after this latest episode of state involvement. However, there would one more major criminal event — the killing of town founder and developer Ace Borger on August 31, 1934. Ace had long been extremely generous with many of his friends and acquaintances, while being very tight with others. This often caused hard feelings with some folks. In June, 1930, Ace established the Borger State Bank, with himself as president and his son as vice president. Before the year was even over, the bank failed, causing a panic among local businessmen and small depositors.

This raised the ire of those who didn’t like him, especially a man named Arthur Huey, who was the Hutchinson County Treasurer. Ace Borger was later convicted of receiving deposits in the insolvent bank and assessed a two-year prison term. However, he remained free as the judgment was on appeal.

Some time later, Hutchinson County Treasurer, Arthur Huey was jailed for embezzlement and asked the normally generous Ace Borger to help bail him out. When Borger refused, Huey made threats against his life. Huey was able to raise the bail without Borger’s help and on August 31, 1934, when Borger was getting his mail at the city post office, Huey shouted obscenities at Borger and shot him five times with a Colt .45. He then took Borger’s own .44 and fired four more into him. An innocent bystander was also hit by a shot and died five days later. Amazingly, Huey was acquitted for the murder claiming self-defense. Later; however, Arthur Huey was sent to prison for embezzlement of county funds. 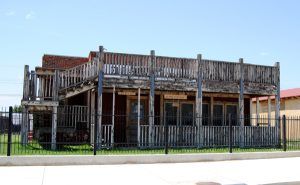 The 1927 El Reno Ice House is one of the oldest buildings in Borger, Texas,. Kathy Weiser-Alexander, July, 2013.

The decade of the 1930’s was a mixture of boom and depression for Borger as well as the rest of Hutchinson County. The nation was going through the Great Depression, and the great storms of the Dust Bowl had begun. With ten Carbon black plants in the area, volumes of black soot was added to the Dust Bowl storms, covering the town in layers of dark grime. Many an “Okie” migrant, fleeing from their devastated farms, found jobs in the oilfields and plants. During World War II, synthetic rubber and other petroleum products became important in the Borger area. Borger’s population was listed at 14,000 in 1943.

By the 1960s the Borger area was one of the largest producers of oil, carbon black, and petrochemicals and supplies in the state. The creation of nearby Lake Meredith also added to the town’s economy as an important recreational area. In 1960, Borger’s population was 20,911, but, ten years later had dropped to 14,195. Today, Borger is called home to some 13,000 people an remains an important shipping point for agricultural produce as well as continuing to manufacture numerous petroleum products.

The Hutchinson County Museum, also known as Boomtown Revisited, houses artifacts of the county’s pioneer past. Borger is located at the junction of State highways 136, 152, and 207, in south central Hutchinson County. 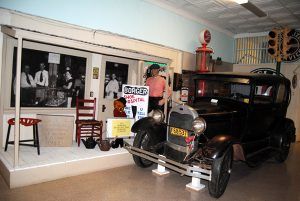