Passing Lane: Also called the left-lane, over-taking lane, and informally, the “fast-lane,” and “go-lane,” the passing lane is exactly what it says it is — designated for passing.

It is not a driver’s personal scenic byway; it is not a lane where drivers are allowed to go the speed limit to send a message to any who are “breaking the law” by speeding, it is not a place to make a point that you can do anything you want and be damned anyone who tells you otherwise.

For decades, since the highway system has expanded, there are those who either don’t know or refuse to accept this lane for what it is, causing accidents, using more fuel, and leading to road rage.

But, for many states, this is changing. Thank Goodness!!  Though some states have had laws on the books for years — that the left lane is for passing only, they are stepping up to the plate and enforcing those laws with hefty fines and court costs. For example, play this silly game in Kansas, and it could cost you $146, in Georgia $75, in Missouri $77, in Oklahoma a whopping $206, and in almost all other states as well, with fines varying state by state.

Making things even better for those of us that have been pounding our steering wheels, cursing in the silence of our cars, and flashing our bright lights for years; is the economy. In many states, where this law has relatively been ignored, the need for state and local revenue is increasing the number of tickets given for this violation. Better learn fast, left-lane gad-a-longs.

“Traffic driving in the left lane for prolonged periods does cause gridlock and backup, and it really defeats the purpose of having a multilane highway. You should remain in the right lane if you’re slower traffic.”

According to the National Motorists Association, there are several benefits in adhering to these laws:

You’re Less Likely To Be In An Accident. By not obstructing other drivers, traffic is able to flow more smoothly. When traffic flows smoothly, there is less tailgating, less weaving in-and-out of traffic, and therefore fewer accidents.

You’ll Get Better Gas Mileage. Lane courtesy promotes the smooth flow of traffic and helps drivers maintain an even pace. Vehicles use the most gas when accelerating. Less braking followed by acceleration will improve fuel economy.

You’ll Get To Your Destination Faster. Yielding to faster traffic reduces congestion. When traffic is flowing smoothly, highway capacity can be utilized to the fullest extent.

You Will Not Have To Deal With Road Rage. There’s little doubt that “left lane hogs” are a source of irritation for many drivers. The courteous act of moving to the right can eliminate driver stress and conflict.

Though many states have signage that states “Slower Traffic Keep Right” and “Keep Right to Except to Pass,” still these left-lane lovers linger. Common Practice and most laws on United States Highways is that the left lane is reserved for passing and faster-moving traffic and that traffic using the left lane must yield to traffic wishing to overtake. These laws refer to the “normal” speed of traffic, not the “legal” speed of traffic. So, if traffic flow is traveling at 60 mph in a 55 mph zone, the 55 mph driver is required to move right.

The United States Uniform Vehicle Code states: Upon all roadways, any vehicle proceeding at less than the normal speed of traffic at the time and place and under the conditions then existing shall be driven in the right-hand lane. 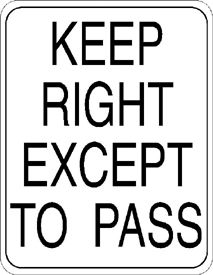 Some defend their actions of sitting in the passing lane for mile upon mile without ever moving over, blocking traffic, causing backups, headaches, frustration, and road rage, as their “right,” but they are wrong more and more as states are passing new laws and enforcing old ones, in order to ease traffic flow and reduce aggressive driving. For example, Colorado states: The Colorado State Patrol is always concerned with actions that lead to aggressive driving. The longer a slower-moving vehicle occupies the left-hand travel lane, the more frustrated some drivers become, particularly when heavy traffic volume prevents vehicles from passing. Once these drivers have reached their boiling points, acts of aggressive driving and offensive gesturing become more prevalent.

So, why do people drive in the left lane anyway?

Again, according to the National Motorists Association, these are the excuses to avoid:

Failure to yield the left lane is often caused by nothing more sinister than someone not paying attention. This can still be dangerous, which is why it’s a good idea to merge right if you are not passing anyone.

Unfortunately, there are also people who deliberately refuse to practice lane courtesy.

These “left-lane hogs” have all sorts of excuses for their inappropriate and unsafe behavior. They say the left lane is smoother or that it’s easier to see from. Some even claim they are doing faster drivers a favor because faster cars can stay in the right lane and don’t have to pull out to pass them.

The granddaddy of all “left-lane hog” excuses is, “I’m driving the speed limit; I shouldn’t have to move over.”

Of course, anyone who honestly looks at speed limits on our roads knows they rarely reflect actual travel speeds. Instead, they are arbitrary, politically generated numbers that have no relationship to real engineering standards.

This means a driver going the speed limit in the left lane can still be a serious problem. They can cause abrupt lane and speed changes, as well as hostility or road rage. Even if our speed limits were more realistic, there is no good reason to remain in the left lane if a faster vehicle wishes to pass you. It only creates friction and makes our roads more dangerous.

That’s why most states have laws that regulate driving in the left lane. Some allow it only for passing, and others require slower traffic to yield the left lane if a faster vehicle is approaching. To find out the law in your state, click here.

To adhere to the law and keep our highways safe for yourself and other travelers, follow these simple rules: