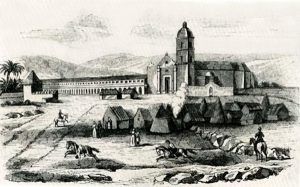 The San Luis Rey Mission in Oceanside, California, was the 18th of the 21 original missions established by the Spanish throughout California during the 18th and early 19th centuries. Today, the mission church is among the finest existing examples of Spanish-Colonial architecture in the state.

By the late 1700s, the Spanish government in New Spain (modern-day Mexico) had already authorized the establishment of 17 Catholic missions throughout Alta California. The vast northern territory was lush with appealing resources for the Spanish and a long coastline dotted with protected bays. The systematic establishment of missions was an inexpensive and strategic move to help bring religious and political ideologies to the native people who populated the area. One hope for the missions was to mitigate potential native aggression as the Spanish moved north to colonize these areas themselves.

Padre Fermín de Francisco Lasuén founded the 18th of the Spanish missions, San Luis Rey de Francia, in 1798. It was named after St. Louis IX, King of France, who lived during the 13th century. He chose the original site, just east of modern-day Oceanside, for its protected nature within a valley, the availability of building resources and water, and the proximity of a large tribe of Luiseno Indians. Constructed in 1798 at the mission’s first founding, the original church was a small and simple adobe building. However, by 1802, early success and an increase in Catholic conversions necessitated the building of a bigger church with adobe walls and a tiled roof.

The third church, which remains on the site today, dates from the peak of the mission’s success. Construction on this church began in 1811, but due to its impressive scale and intricacy, the church was not finished until four years later, in 1815. Antonio Ramirez, a master stonemason, oversaw the work of native converts who performed a majority of the labor. The main walls of the new church were impressive at 30 feet high and five feet thick with an adobe interior and baked brick exterior. White lime plaster coated the walls, and the church’s main facade featured a mix of Baroque and Classical styles, including a 75-foot tall bell tower at its eastern corner. The tower rang a chorus of eight different bells in the 1800s, but only four hang within its belfry today.

Both the original floor and roof of the mission church were of terra cotta tile, and by 1829, a wooden dome sat atop the building. The octagonal dome had an eight-windowed lantern that filtered light down into the nave and crossing below. The restored dome remains today and is unique among all of California’s Spanish missions. The building is one of only two cruciform (cross-shaped) churches ever built by the Spanish in the region. 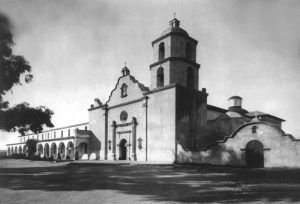 By the mid-19th century, the San Luis Rey de Francia Mission was expansive, with landholdings covering approximately 950,400 acres. Over 3,000 converted native people lived at the mission and helped tend the land and care for the 50,000 head of livestock. Grapes, oranges, olives, wheat, and corn were just some of the crops produced on the property. The primary mission buildings, including the church, ringed a large central plaza, 500-feet square. At the height of its glory, the mission included irrigation channels and an outdoor lavanderia (laundry), a convento for housing the friars, officers barracks, dormitories for residents, workshops of various types, a long decorative colonnade, and an extensive gated cemetery.

Mexico gained its independence in 1821, cutting short the period of prosperity for the San Luis Rey Mission. Under a new Mexican law, all of the California missions were secularized within a decade. Many, including San Luis Rey de Francia, went through periods of divided ownership and neglect. As nearby Indian towns grew, much of the quality materials of the mission church were stripped to use in new construction. 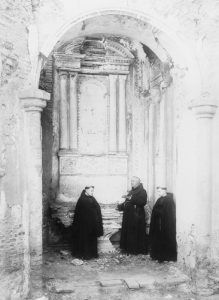 Between 1847 and 1857, the mission church served as an operational base for the United States military. California became the 31st state in the Union in 1850. The men were not greatly concerned with the upkeep of the church, even housing livestock within its walls. President Lincoln officially returned the mission to the Catholic Church in the 1860s, but the entire property was in such disrepair that the church abandoned it.

Mission San Luis Rey de Francia might have vanished entirely from the landscape had it not been for a group of Mexican Franciscans who reoccupied the church in 1892. Under the guidance of Father Joseph Jeremias O’Keefe, massive rebuilding and restoration began. Despite the deterioration over the years, much of the original mission remained, as did original drawings, plans, and designs. After O’Keefe’s death, the restoration of the site continued.

Today, San Luis Rey Mission Church is a part of the restored mission complex that sits on 56 acres of its original land. Franciscan friars still study, worship, and live at the mission, and it is highly regarded as both a religious and heritage site. The church is among the most stunning Spanish mission churches and is a popular tourist attraction in Southern California. Original patterns found in the church’s old documents and on remnant textiles decorate the interior. Outside, the church is believed to look much as it would have when originally constructed.

In addition to the church, visitors can view the other impressive features of the site. One of the most fascinating ruins left at the mission is the old lavanderia. Just to the south of the mission church, this structure consisted of a tiled irrigation system in which water spouted from the mouths of carved gargoyles. The water was diverted from the nearby San Luis Rey River and used for bathing and laundering garments. The water capturing and retention system was advanced, even by modern standards. The lavanderia has been an archeological site since its unearthing in 1955, and today visitors can see its tiled stairs, channels, and stone pools. The gargoyles remain intact and are believed to be the only known examples of carved Luiseno sculpture. 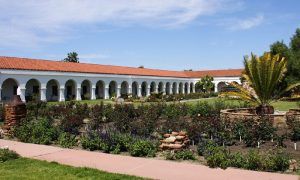 Ruins of the original convento arches, colonnade, officers’ barracks, and lime kiln are still on the grounds, as is the original mission cemetery – the oldest in North San Diego County. In the middle of the original central square is a massive tree. Planted in 1830, it is still alive as the oldest and first pepper tree in California.

The mission’s museum interprets the San Luis Rey Mission Church and its surrounding structures for the public. Housed in the former convento, the museum oversees all of the preservation and conservation efforts for the church and its extensive historical collections. Exhibits feature the history of the mission and include objects and artifacts from both the Spanish Colonial and Mexican periods.

Today, the San Luis Rey Mission Church is a National Historic Landmark and is open daily to visitors with an admission charge. 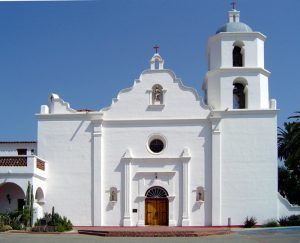