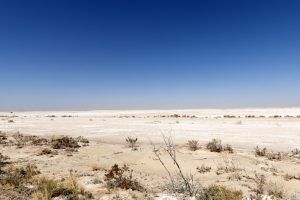 Salt Flat, Texas, is a ghost town located in Hudspeth County in west Texas. The town takes its name from its location within a dry salt pan, a flat expanse of ground covered with salt and other minerals. The salt came from shallow lakes formed in the Rio Grande Valley after rains in the Guadalupe Mountains.

Though Native Americans and Mexicans had utilized these salt deposits for centuries, in the late 1860s, the region between Salt Flat and El Paso, some 90 miles to the west, came into a dispute as El Paso businessmen tried to acquire title to the salt deposits. This prompted the 12-year-long El Paso Salt War between the businessmen themselves and against the area’s locals, resulting in the deaths of as many as 30 people and multiple injuries. The “war” involved factions on both sides of the border and eventually required the help of the Texas Rangers as well as the U.S. Army. Because of the dispute, Fort Bliss in El Paso, which had been closed in 1877, was reestablished the same year.

However, the town of Salt Flat didn’t exist during these turbulent times, as it didn’t get its start until the 1920s. In 1928, Edwin W. Hammack, the son of a rancher from Van Horn, Texas, learned from highway surveyors that a new highway between El Paso and Carlsbad Caverns, New Mexico, was to pass through the area. Before that time, the only roads between the flats and El Paso had been rude affairs that followed along buried oil pipelines. 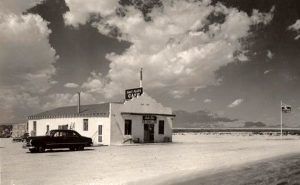 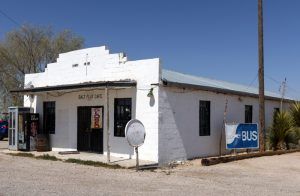 Hammack built a store and gas station on the proposed route, which opened for business when traffic began in 1929. From the outset, his site doubled as a bus station. A short time later, another man named Arthur Grable built a store and gas station a short distance to the west. Both men eventually added cafes and tourist courts to their operations. 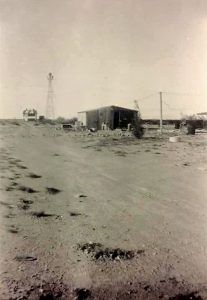 The airfield in Salt Flat, Texas.

In 1932, a plane crashed in the nearby Guadalupe Mountains due to fog, and the federal government responded by building an emergency aircraft landing strip at Salt Flat. The airfield operated 24 hours a day until the early 1960s, when new navigational equipment permitted planes to cross the mountains even in poor weather conditions.

In the meantime, salt mining continued in the area, with men loading the salt into wagons or trucks which hauled it to customers as far north as the Sacramento Mountains and as far south as Van Horn and Marfa. However, in the late 1930s, irrigation water pumping at nearby Dell City lowered the water table to such a degree that natural salt ceased to be deposited in its previous amounts, and mining became unprofitable. 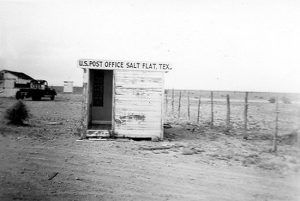 A post office was established in Salt Flat in 1941, with Ben H. Gilmore serving as the first postmaster. At that time, the town was called home to just about 20 people. After just three short years, the post office closed but was reopened in 1947.

Toward the end of the 1940s, Salt Flat had an estimated 70 residents, and in the early 1960s, it reached its peak population of about 125. By 1970 its population had dropped to 35 and continued to drop over the following decades. The town’s post office closed its doors forever in January 2004. 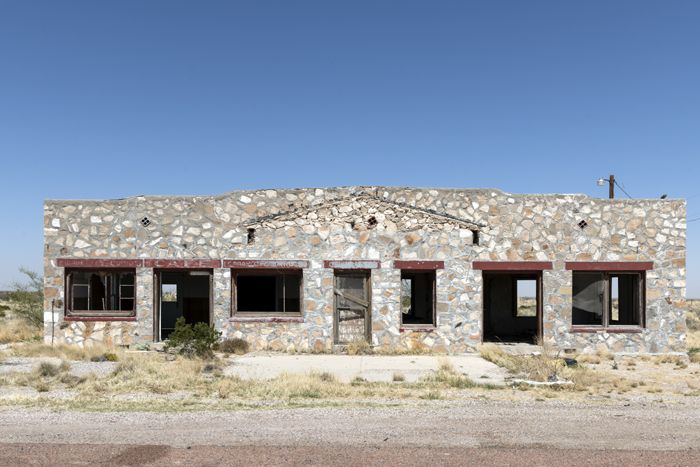 An old building west of Salt Flat, Texas, by Carol Highsmith. This may have been the site of the second store and cafe.

Today, Salt Flat is comprised of just a few mostly abandoned buildings and what appears to be even fewer people. However, a Greyhound bus stop still is in use at the side of the old 1929 cafe, but the bus doesn’t stop unless passengers stand beside the road and wave it down.

Locals provide “a word to the wise” to travelers thinking about taking a fun drive through the shining white Salt Flats of the area. Though they look solid and flat, many travelers have gotten stuck in these sands, facing significant expenses for tow trucks to come from as far away as El Paso. 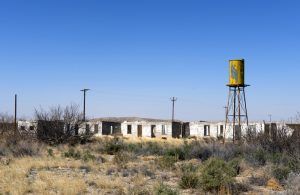