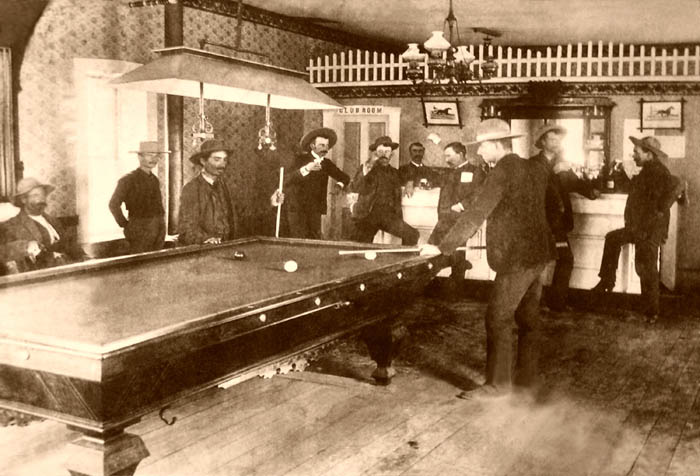 Also called the Bank Exchange Saloon, J. Y. Thornton and George Curry owned this place. The saloon featured a billiard’s table with the bar at the back of the room. Behind the bar is a mirror and shelves, and it appears the bar had the typical foot rail, on which a cowboy is resting his foot. Walls are adorned with patterned wallpaper and a few prints. Lighting provided by lamps hanging from the ceiling and the floor is made of plank boards. 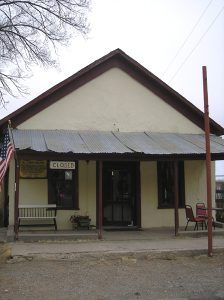 A native of Pennsylvania, J. Y. Thornton came to New Mexico as a soldier in the United States Army in 1870. After serving for five years with the Fifteenth Infantry stationed at Fort Stanton, he was discharged in 1875. Afterward, he engaged in the cattle business at Fort Stanton with George Curry for five years, and the two opened the saloon and hotel in Lincoln, New Mexico, in about 1880. Thornton also owned the Pioneer livery stable in Lincoln. The very next year, a bit of excitement took place right across the street from the saloon when Billy the Kid, who was housed in the jail, awaiting execution, killed his guards and escaped on April 28, 1881. Thornton moved from Lincoln to Roswell, New Mexico, in 1895.

Thornton’s partner in the saloon and hotel was George Curry, a Louisiana native working as the post trader at Fort Stanton, where the two met. Finding he had an interest in politics, Curry served as the deputy treasurer, county clerk, county assessor, and sheriff of Lincoln County. He would later enlist in Teddy Roosevelt’s Rough Riders and serve as a member of the New Mexico Territorial Senate and Territorial Governor.