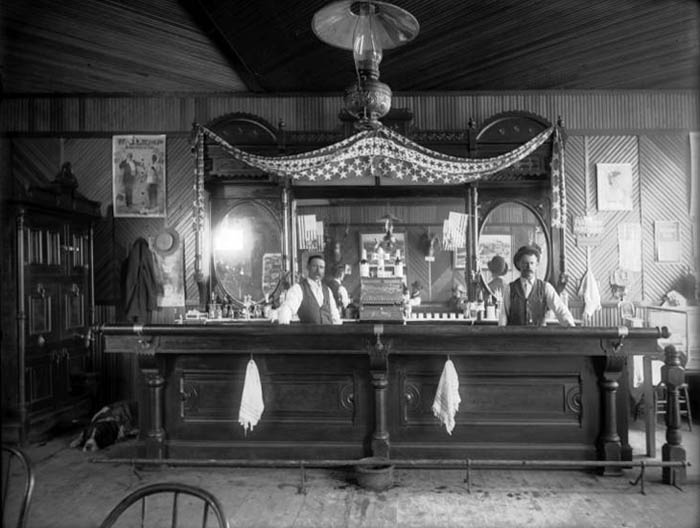 An interior view of a saloon in Meeker, Colorado, shows two men posing behind the long wooden bar, from which towels for the customers hang, a foot rail sits below, and a large spittoon is on the floor in the middle. Behind the bar is a large wooden fixture that features one rectangular and two oval inset mirrors. Reflected in the mirror are what appears to be a stuffed deer and bighorn sheep head. Bartop displays a cash register, bottles, and glassware. From the back fixture, hangs patriotic bunting and two small American flags. The walls are decorated with advertising posters and a calendar. The saloon is lit by a kerosene lamp hanging from the ceiling, and a spittoon is sitting on the floor. Note the dog on the floor left of the bar.

Meeker, Colorado, situated in the wide fertile valley of the White River in northwestern Colorado, is, and always has been, relatively isolated. This was not one of the many mining towns for which Colorado is well known but, rather, a farming community. The town was named for Nathan Meeker, the United States Indian Agent who was killed, along with 11 other people, by White River Ute Indians in the 1879 Meeker Massacre. Today, Meeker is called home to about 2,500 people.

When Meeker was first established, it was known for its hunting, drawing visitors in from all over the nation, including Theodore Roosevelt. This image of a Meeker Saloon was taken during that time.