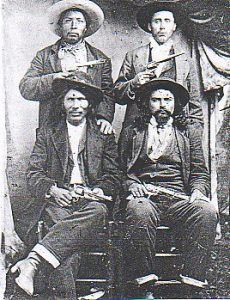 The Indian Police in Oklahoma were given the name Lighthorse by the Five Civilized Tribes when the state was still Indian Territory.

As early as 1808, when the Cherokee were still located in the southeast, they appointed “regulators” to stop crime, protect widows and orphans, and kill those who resisted authority. The tradition continued after the Cherokee were forced on the “Trail of Tears” to Indian Territory and was taken up by the other “civilized” tribes, including the Chickasaw, Choctaw, Creek, and Seminole tribes. The police force got its name from Revolutionary War hero General Henry Lee who was called “Lighthorse Harry” due to how quickly his cavalry responded to conflicts.

The first official Lighthorse Company was formed in 1844 by the Cherokee National Council. Composed of a captain, lieutenant, and 24 horsemen, the men were tasked with pursuing and arresting all fugitives from justice before turning them over to the Indian courts for trial and punishment. Though history tends to focus on the U.S. Deputy Marshal’s activities in Indian Territory, the Lighthorse Police were just as important, and their tales, unfortunately, remain mostly “unsung.”

When the Five Civilized Tribes lost their tribal lands in the late 19th century, the Lighthorse Mounted Police were disbanded. However, some tribes still use the Lighthorse name for elements of their police forces.