Rochford, South Dakota, an old mining camp in Pennington County, is said to be the friendliest ghost town in the Black Hills. 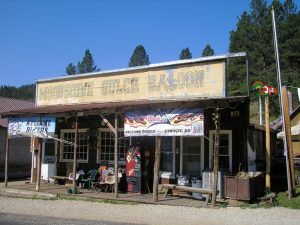 In August 1876, three hunters from Deadwood — M.D. Rochford, Richard B. Hughes, and William Van Fleet accidentally discovered a gold-bearing rock on Montezuma Hill. This would later become the Montezuma Gold Mine.

The first cabin was established in February 1877 by M.D. Rochford. When a party of prospectors from Castle Creek found more gold in several locations in March, the Rochford Mining District was organized to record their discoveries. Soon, numerous miners from Lead and Central City poured into the area, staking claims on Little Rapid Creek. In May 1878, M.D. Rochford, the county commissioner, and Richard B. Hughes laid out the town in a gulch. Both the mining district and the town were named for M.D. Rochford. Lots were sold for $10 to $60. 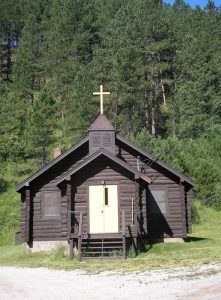 An old church in Rochford, South Dakota by Kathy Alexander.

By December, Rochford’s population was 500, and another 500 prospectors lived in tents or log shelters on the nearby hills. At that time, the mining camp also boasted a few doctors, a Methodist Episcopal Church, three saloons, six stores, and more than 100 homes.

By January 1879, several more businesses had been added, including two hotels, a theater, a butcher shop, two restaurants, two blacksmith shops, a drug store, and the Reder Brothers Sawmill. The sawmill was moved from Rockerville to provide lumber for the town’s buildings, and within a short time, it produced 100,000 feet of lumber and 50,000 feet of roof shingles. Soon, Lawrence County funded the building of a highway to connect Deadwood to Rochford for $300.

There were several mining operations working in the area, including the Silver Reef, Resumption, Pride of the West, Oro Cache, Rattler, Mountain Treasure, Justin, Glenwood, Little Woodchuck, Ethan Allen, Wide West, and Surprise Fraction, as well as branches of the Homestake Mining Company. But most of the gold came from the Evangeline Mine on Irish Gulch, and the Minnesota Mine on Silver Creek, both of which had 20-stamp mills clattered away all day long. The most active producer was the Standby Mine which featured a 40-stamp mill, a specially constructed elevated flume to haul water and create power, and a large office/dwelling called “The Mansion.” The large mill was built in 1879 and 1880 and stocked with equipment shipped by wagon from Bismarck, North Dakota. 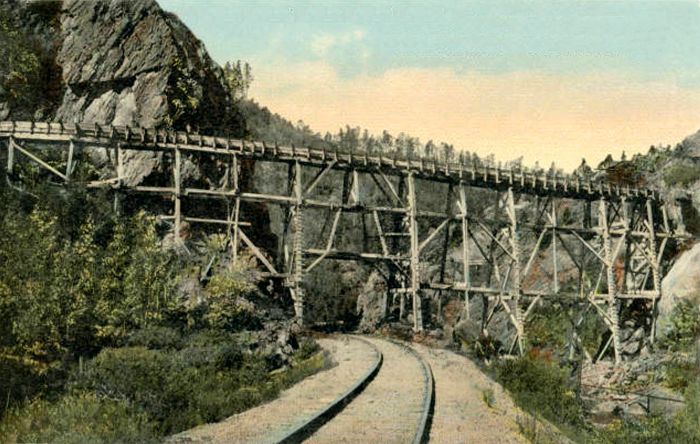 Elevated flume at the Standby Mine in Rochford, South Dakota.

When the mines were working to capacity, Rochford was a lively place, and many of the men hung out at the Shamrock Dance Hall and the Irish Gulch Saloon. Residents and visitors frequented the block-long line of stores connected with wooden canopies covering the sidewalks. Unlike many western mining camps, Rochford experienced very little violence, unlike the wild and woolly Lead and Deadwood, just 21 miles to the north. 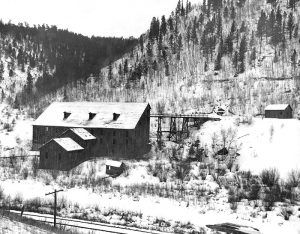 The Standby Mine in Rochford, South Dakota. 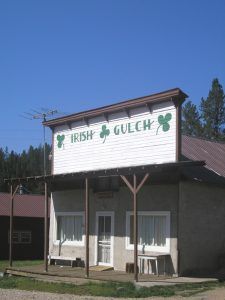 In June 1881, the Black Hills Daily Times noted the inactivity of the Standby Mill, calling it “a stale, flat unprofitable piece of property, which is a grievous sight to behold to those who regard the prosperity of the country.” Unfortunately, by that time, the mine had become unprofitable and shut down for a time.

By 1884, mining had picked up again, and the Black Hills Daily Times reported that the “Standby was running on good ore.” At that time, ore came from six different places as the miners worked deeper into the mine. The Standby Mill was then running at full capacity, with all of its 60 stamps in operation for the first time in three years.

In 1889, the Burlington Northern Railroad came through Rochford as the tracks were pushed to Deadwood from Custer.

In the next years, the mine would operate only intermittently and the town began to decline. By 1900 only a post office and 48 residents remained. 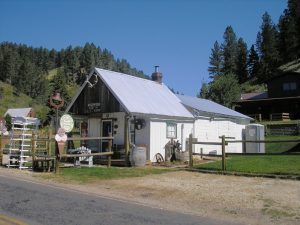 This small store in Rochford, South Dakota, was once a gas station by Kathy Alexander.

In the 1930s, the Standby Mill was rebuilt and continued operation until 1942. The large office/dwelling that was known as “The Mansion” was torn down sometime before 1950 and the mill was torn down in 1987.

In the 1950s, only the Moonshine Gulch Saloon, the Irish Gulch Dance Hall, and one store were open. The Burlington Northern Railroad tracks were torn up in 1985-1986.

Today, Rochford is called home to only about ten people, but the old mining camp continues to display several historic buildings. The Moonshine Gulch Saloon is still operating and welcomes hundreds of visitors and tourists.

Rochford is located about 16 miles northwest of Hill City on Forest Service Road 17, a gravel road that leads from Mystic, through Rochford, before making its way to Lead and Deadwood. 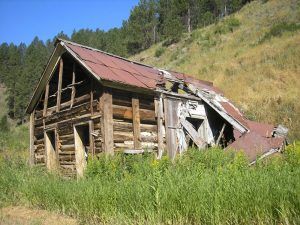