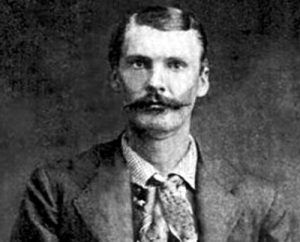 John Calhoun Pinckney “Pink” Higgens was a Texas gunfighter who was involved in the Horrell-Higgins Feud.

Pink was born in Georgia in 1848 but moved with his family to Texas when he was just a boy. They first settled near Austin before establishing a ranch in Lampasas County in 1857. When he grew up, he worked at a variety of occupations including owning a meat market and saloon. During this time he also honed his shooting skills fighting Indians and was briefly an officer in the Ku Klux Klan. By the early 1870s, he was driving herds of cattle to the Kansas railheads and on at least one occasion, combined his herd with that of the Horrell brothers, who ranched nearby.

In March 1873 the Horrells were involved in a saloon shootout with Texas State police in Lampasas, in which three law officers were killed. Also killed was Pink’s son-in-law and soon, a vicious feud between the two families erupted, referred to as the Horrell-Higgins Feud. Over a several-year period, several shooting scrapes occurred, finally culminating in a shoot-out in the Lampasas town square on June 14, 1877, in which several men were killed. A few more skirmishes occurred before the feud was said and done.

Around the turn of the century, Higgins moved his ranch to the south of Spur, Texas. He continued his gunfighting ways and was said to have killed between 14-18 men during his lifetime. He died at his ranch of a heart attack on December 18, 1914.