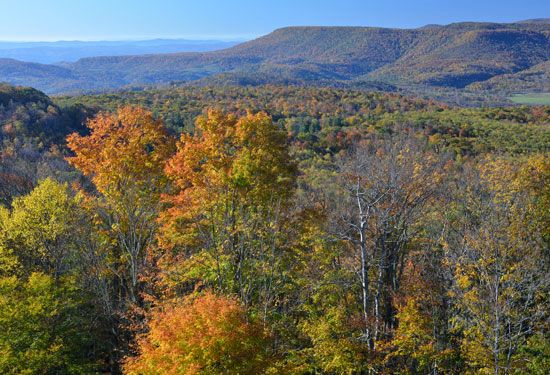 Nemacolin’s Trail was an ancient Native American trail that connected present-day Cumberland, Maryland with what is now Brownsville, Pennsylvania. It ended in the neighborhood known today as Redstone located at the mouth of Redstone Creek. In colonial America, the site was known as Redstone Old Fort for its defensive installation. It crossed the great barrier of the Allegheny Mountains via the Cumberland Narrows Mountain pass and connected the Potomac River and the Monongahela River watersheds on either side of the Allegheny range.

During 1749 and 1750, Delaware Indian Chief Nemacolin and Maryland frontiersman, Thomas Cresap, supervised improving the trail. Nemacolin’s Trail became the gateway by which settlers in Conestoga wagons or by stagecoaches reached the promised lands of America near and far west. In 1755, the eastern part of Nemacolin’s Trail was used as a military route for British General Edward Braddock’s ill-fated attempt to capture Fort Duquesne, becoming Braddock’s Road. Later parts of the trail would form the Cumberland Road, the National Road, the National Pike, and eventually U.S. Route 40. In 1785 the State of Pennsylvania authorized “The Pennsylvania Road” from Harrisburg to Pittsburgh following the old Forbes Road. 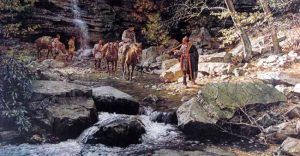 The road was changed in many ways. It now ran through Greensburg rather than Hannastown and took a south branch through Wilkinsburg. The Great Conestoga Road, completed in 1741, and the later Lancaster Pike, which opened in 1794, went from Philadelphia to Lancaster. These two roads were linked and this was now the main migration route from the east to the Ohio Valley after the American Revolution until the building of the Erie Canal in 1834. This road combined the Raystown Path from near Pittsburgh to Harrisburg and the Allegheny Path to Philadelphia. The Raystown Path was blazed by Delaware and Shawnee Indians moving between the Forks of the Ohio River at present-day Pittsburgh and the lower Susquehanna Valley at modern-day Harrisburg. Prior to the French and Indian War, it was the primary route for Pennsylvania fur traders and their packhorses moving in and out of the Ohio Country.