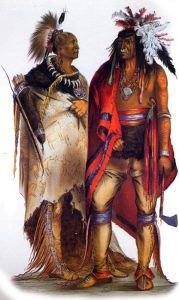 The Great Shamokin Path was a major Native American trail in Pennsylvania that ran from the native village of Shamokin in present-day Sunbury to the Great Island near modern-day Lock Haven. This path of trade and communication figured prominently in the population and development of northwestern Pennsylvania, from ancient times through the era of the American Revolution.

In 1718 Shamokin was the most important Indian town in Pennsylvania. Here, an Iroquois command post controlled the movements of refugee groups of Shawnee, Tuscarora, Conoy, Nanticoke, and others Indians from the south. The path connected Shamokin to Kittanning on the Allegheny River, the largest Indian settlement to the west before its destruction by Colonel John Armstrong in 1756. These two towns controlled most of the water and foot traffic in all of Pennsylvania and extended to Lake Erie and Syracuse in the north, the Delaware River in the east, the Potomac River in the southeast, and the Ohio River Valley in the southwest.

The colonists recorded the path as used by Moravian Bishop Ettwein and his group of some 200 Lenape and Mohican Christians in 1772. They traveled west along the path from their village near modern Wyalusing on the North Branch of the Susquehanna to their new village on the Beaver River in southwestern Pennsylvania.

Today a four-mile-long rail trail in Armstrong County follows a short portion of the Great Shamokin Path and the former course of the Rural Valley Railroad. 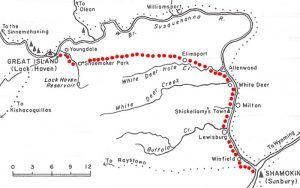