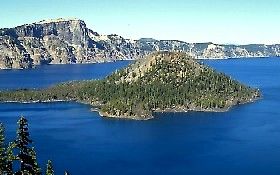 Crater Lake, Oregon, was a haunt of water-devils who dragged into it and drowned all who ventured near. Only within a few years could Indians be persuaded to go to it as guides. Its discoverers saw in it the work of the Great Spirit, but could not guess its meaning. All but one of these Klamaths stole away after they had looked into its circular basin and sheer walls. He fancied that if it was a home of gods they might have some message for men, so camping on the brink of the lofty cliffs he waited. In his sleep, a vision came to him, and he heard voices but could neither make out appearances nor distinguish a word. Every night this dream was repeated. 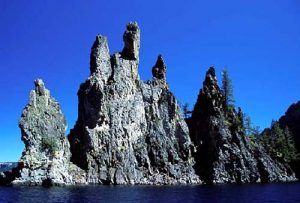 He finally went down to the lake and bathed, and instantly found his strength increased and saw that the people of his dreams were the genii of the waters–whether good or bad he could not guess. One day he caught a fish for food. A thousand water-devils came to the surface, on the instant, and seized him. They carried him to a rock on the north side of the lake, that stands two thousand feet above the water, and from that they dashed him down, gathering the remains of his shattered body below and devouring them. Since that taste, they have been eager for men’s blood. The rock on the south side of the lake, called the Phantom Ship, is believed by the Indians to be a destructive monster, innocent as it looks in the daytime.

The monster Amhuluk, whose home is a lake near Forked Mountain, Oregon, had but one passion-to catch and drown all things; and when you look into the lake you see that he has even drowned the sky in it, and has made the trees stand upside down in the water. Wherever he set his feet the ground would soften. As three children were digging roots at the edge of the water he fell on them and impaled two of them on his horns, the eldest only contriving to escape. When this boy reached home his body was full of blotches, and the father suspected how it was, yet he went to the lake at once.

The bodies of the children came out of the mud at his feet to meet him, but went down again and emerged later across the water. They led him on in this way until he came to the place where they were drowned. A fog now began to steam up from the water, but through it, he could see the little ones lifted on the monster’s horns, and hear them cry, “We have changed our bodies.” Five times they came up and spoke to him, and five times he raised a dismal cry and begged them to return, but they could not. Next morning he saw them rise through the fog again, and, building a camp, he stayed there and mourned for several days. For five days they showed themselves, but after that, they went down and he saw and heard no more of them. Ambuluk had taken the children and they would live with him forever after. 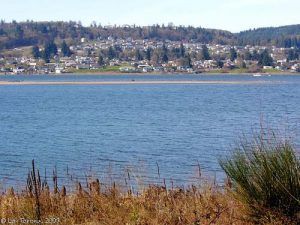 A Spanish bark, one day in 1841, put in for water off the spot where Columbia City, Oregon, now stands. She had a rough crew on board, and it had been necessary for her officers to watch the men closely from the time the latter discovered that she was carrying a costly cargo. Hardly had the anchor chains run out before the sailors fell upon the captain, killed him, seized all of the value that they could gather, and took it to the shore. What happened after is not clear, but it is probable that in a quarrel, arising over the demands of each man to have most of the plunder, several of the claimants were slain. Indians were troublesome, likewise, so that it was thought best to put most of the goods into the ground, and this was done on the tract known as Hez Copier’s farm.

Hardly was the task completed before the Indians appeared in large numbers and set up their tepees, showing that they meant to remain. The mutineers rowed back to the ship, and, after vainly waiting for several days for a chance to go on shore again, they sailed away. Two years of wandering, fighting, and carousal ensued before the remnant of the crew returned to Oregon. The Indians were gone, and an earnest search was made for the money–but in vain. It was as if the ground had never been disturbed. The man who had supervised its burial was present until the mutineers went back to their boats when it was discovered that he was mysteriously missing.

More than forty years after these events a meeting of Spiritualists was held in Columbia City, and a “medium” announced that she had received a revelation of the exact spot where the goods had been concealed. A company went to the place, and, after a search of several days, found, under a foot of soil, a quantity of broken stone.

While throwing out these fragments one of the party fell dead. The spirit of the defrauded and murdered captain had claimed him, the medium explained. So great was the fright caused by this accident that the search was again abandoned until March 1890, when another party resumed the digging, and after taking out the remainder of the stone they came on a number of human skeletons. During the examination of these relics–possibly the bones of mutineers who had been killed in the fight on shore–a man fell into a fit of raving madness, and again the search was abandoned, for it is now said that an immutable curse rests on the treasure.