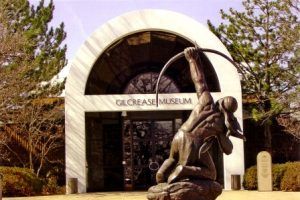 Sitting on a 460-acre plot of land in northwest Tulsa, Oklahoma, the Gilcrease Museum houses one of the world’s most extensive and renowned collections of Native American and Western art and artifacts. It is also said to be home to several resident ghosts.

Once owned by oilman, art collector, and philanthropist William Thomas Gilcrease, the estate was preserved for the public after his death in 1962.

William Thomas Gilcrease was born in Robeline, Louisiana, on February 8, 1890, to William Lee and Mary Elizabeth (Vowell). His mother was of Creek Indian ancestry, and shortly after his birth, the family moved to Indian Territory, where they lived on Creek Nation tribal lands.

His father built a log home near Eufaula and ran a cotton gin in the nearby community of Mounds. Thomas received his education in a one-room schoolhouse under the tutelage of Creek poet Alex Posey. Under Posey’s guidance, Thomas was given a good education that would fire his imagination for the rest of his days.

At the turn of the century, the federal government dissolved the Indian Nations’ land, distributing the 160-acre parcels into private ownership. Just nine years old, Thomas, being of 1/8 Creek heritage, received his acreage, which was located about twenty miles southwest of Tulsa. Appearing to be little more than a dry, dusty area of the Osage Hills that would dramatically change in 1905 when drillers struck oil in the area.

His land, sitting astride the huge Glenn Pool Reserve, made Gilcrease a multi-millionaire by the time he was 20. Though struggling in the beginning, he soon proved to be an astute businessman in the cut-throat business of oil tycoons.

By 1913, Thomas was looking for a place for his growing family when he noticed a new stone house northwest of the boomtown of Tulsa. Flowers Nelson, a Tulsa lawyer, and his wife, Carrie, owned the property. They had acquired the property in 1909 and built the house of native sandstone, which was perched atop a hill overlooking the booming town of Tulsa. Gilcrease liked the stone house, with its large wrap-around porch, so much, he soon made an offer on the property, and on December 26, 1913, the offer was accepted. Along with some 80 acres, the house soon became known as “Toms Place” and “The Little Stone House on the Hill.” Also sitting on the property were a garage and a barn.

After purchasing the house, Gilcrease began to travel extensively, especially to Europe. While there, he was so inspired by the historical museums that he vowed to start his own collection. When 1922 rolled around, it was a year of significant events in his life, when he officially founded the Gilcrease Oil Company to manage his holdings, purchased his first oil painting, and was sued for divorce by his wife of 14 years.

Two years later, in February 1924, Gilcrease entered an agreement with W.O. Ligon and his wife to sell 13 acres of his land. The deal was made under a “contract for deed,” and Thomas allowed them to live in the rock house while he traveled abroad. But the Ligons defaulted on the payments, and the land defaulted back to Gilcrease in 1928.

In the meantime, while Thomas was traveling, he hired “Chief” Cephas Stout in 1927 to begin remodeling and updating the rock house property. A year later, he remarried Norma Smallwood on September 3, 1928. Smallwood, the first Oklahoman to be crowned Miss America in 1926, was only 19 years old. Though the couple had a daughter named Des Cygne in 1929, the marriage was not to last, and it too ended in divorce on October 3, 1933.

Ever-expanding, Gilcrease established his company headquarters in San Antonio, Texas, in 1937 and maintained an office in Europe. In the meantime, he was also expanding his art collection, the bulk of which would be amassed in the years after 1939. When few others were interested in Native American art or artifacts of the American West, Gilcrease sought out single works of art as well as large groups of material from dealers and other collectors. 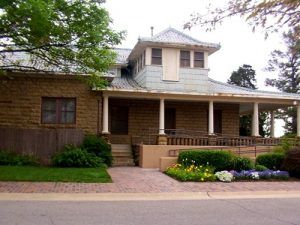 In 1941, Tom told “Chief” Cephas Stout, who had done the remodeling and updating of the stone house, to convert the barn and garage for storehouses for his artwork and artifacts. When complete, he referred to the barn as “His Gallery” and the garage as “His Library.”

In 1943, Thomas opened the Museum of the American Indian in San Antonio. While living there, his stone house was sitting empty, and he decided it could be better utilized as an orphanage for Indian children. He soon renovated the second floor, adding more rooms for the girls and building a second structure for the boys. The garage was utilized as a technical training center for the children.

During this time, Thomas supported several Oklahoma Indian artists, including Crumbo, Acee Blue Eagle, and Willard Stone, each of whom created works that he placed in his collection. In 1946, Gilcrease was honored by the tribal members of the Sioux Nation when he was made an honorary tribal member and given the name Wicarpi Wakatuya, which means “High Star.”

Though the American Indian Museum in San Antonio failed to attract the number of visitors he thought it would, it did not deter the avid collector. In 1947, he made the shrewdest acquisition of American art in the century. Purchasing the entire collection of the late Dr. Phillip Gillette Cole, an avid art collector in New York, the amount paid by Gilcrease at the time wouldn’t buy a single work in the collection today.

Soon, 63 boxes and 11 crates were delivered to Tulsa, which contained twenty-seven bronzes and 46 paintings by Charles Russell, 17 bronzes and 12 paintings by Frederic Remington, and numerous documents and correspondence of well-known characters in the American West. 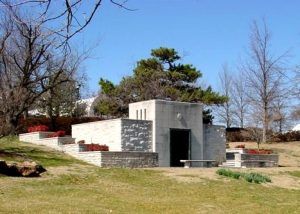 With these new works and the many that he had already collected, Gilcrease hired architect Alexandre Hogue to design a museum on his property to display his treasures. In 1949, Thomas returned to Tulsa with his oil company and opened the Thomas Gilcrease Institute of American History and Art on his rambling estate. Thomas continued to live in the rock house, surrounded by a garden showcasing plants used by the Indians.

During the early 1950s, Gilcrease continued to acquire art, artifacts, and documents. However, it was also at this time that oil prices began to decline, and the art collector found it more and more challenging to finance major purchases.

As his debt continued to mount, Gilcrease offered to sell the entire collection to keep it intact. However, in 1954, fearing that Gilcrease Museum would leave Tulsa, a small group of citizens organized a bond election. The following year, Tulsans approved, by a 3-to-1 margin, the bond issue which paid Gilcrease’s outstanding debts.  Gilcrease then deeded the collection to the City of Tulsa and committed oil property revenue to assist in maintaining the museum until the $2.25 million bond was repaid.

In 1958, the Gilcrease Foundation conveyed the museum buildings and grounds to the City of Tulsa.

After transferring his collection, Gilcrease continued to fund archaeological excavations and acquire even more material for the collection. Thomas died of a heart attack in 1962 and was given a funeral service that included traditional Indian rituals. His remains were interred in a mausoleum upon his estate, and his other art and artifacts were bequeathed to the museum.

During his lifetime, Gilcrease collected more than 10,000 artworks, 250,000 Native American artifacts, and 100,000 rare books and documents, including the only surviving certified copy of the Declaration of Independence. 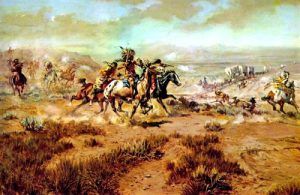 The Gilcrease Museum is said to be the world’s largest and most comprehensive collection of fine art, artifacts, and archives that tell the story of the American West. The grounds also display 23 acres of thematic gardens showcasing the gardening styles of different periods in the American West. Free guided tours of the museum are available, including a gift shop and the elegant Osage Restaurant.

Today, Thomas Gilcrease is just as enamored with his collection as he was in life, as he is said to continue to roam his beloved grounds.  Seen all over the estate, the philanthropist ghost often spends time in the gardens, his favorite place during his lifetime. He is also spied in his former home, which now houses Art Education classes by the Museum Education Department. According to the tales, he has been spied so often at night by security guards; it has contributed to a high turnover rate.

Other reports tell of ghostly children who roam on these historic grounds. Ghost investigators have obtained electronic voice recordings of a woman singing, the sounds of men arguing, and strange whispers.

Other phenomena reported by staff and guests include loud banging noises coming from the museum’s second floor, major temperature fluctuations, doors slamming by themselves, unexplainable technical malfunctions, and items that mysteriously disappear only to show up later in a strange place that it does not belong.

Some estimate that as many as seven different spirits remain on the property, all of which are reportedly harmless and linger only because they like it.

Today, the museum is managed by Tulsa University but is still owned by the city.