In any event, the legend persists and when the apparition of Elizabeth has been sighted, she has been described as having long flowing hair, wearing a white gown, and looking terribly sad as she paces the hallways, calling out to her child. Others have reported her being sighted in Room 109, which is often described as being intensely cold, and on one occasion a ghostly figure appeared in a photograph of the room. However, most people report that while their cameras function normally everywhere else in the hotel, they refuse to work in room 109.

In what was once the main dining room, called the Gold Room, a malevolent spirit, familiarly named “The Stabber,” is said to randomly attack those who cross the threshold with a large kitchen knife. Though the Stabber has never harmed anyone, he is said to have frightened many before immediately disappearing after the “attack.”

Near the lobby staircase, linger three small spirits including two children and a midget that are said to be pranksters, sneaking up behind people and tapping their backs before giggling and dancing away.

Finally, George Wingfield himself is said to haunt his old hotel, making his presence known by his cigar smoke. Others have reported finding fresh cigar ashes in his first-floor room. His presence has also been sensed near the giant lobby staircase. This legend too, has some problems with the history of the old hotel, as Wingfield was not known to frequent the hotel, as it was managed by his partner, Casey McDannell, and Wingfield’s interest was only as an investor. Additionally, Wingfield died in Reno, Nevada in 1959. Why would his spirit continue to linger at the Goldfield Hotel? 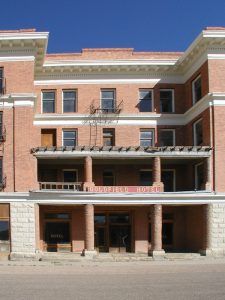 Many psychics who have visited the old hotel claim that it is a gateway into another world. The old hotel has been featured on a number of paranormal investigation television shows.

* Reader Update, April, 2009:  The legend of Elizabeth in the Goldfield Hotel is just that, a legend. If a story is told enough times, as time goes by, then it becomes “true.” I am a direct relative of Martin Duffy, owner of the Florence Mine. During the heyday of the Goldfield Hotel, my great uncle lived in the hotel. At that time, everyone shared a restroom. My great uncle married the elevator operator, Ruth Duffy. As you know the Goldfield Hotel had a working elevator, that still works to this day. There was no Elizabeth, it was just a rumor created to inspire people. My great uncle lived in the hotel during the time of G. Wingfield, and there was no Elizabeth in the hotel. Besides, he moved to Reno shortly after buying the hotel. — Terri Stewart, April, 2009.

* Reader Input, April, 2011:  My great-grandfather on my mother’s side of the family wallpapered and painted the interior of the Goldfield Hotel. He stayed in the hotel while he did his work, while his family remained in Bishop, CA. When the hotel was completed, Pres. Teddy Roosevelt came to the opening festivities, which supposedly included a waterfall of Champaign down the hotel stairs. My great-grandfather met with and shook the president’s hand during these ceremonies, and he also purchased a German-made “Teddy Bear” as a gift for my grandmother. That stuffed bear is in the possession of my mother now. – Ernest Tufft, April 2011

*** Note: Legends of America is in no way affiliated with the Goldfield Hotel nor has any contact information for the present owner. Additionally, please do not contact us with questions about a  Goldfield Hotel Spitoon that you own. All we can tell you about these is that they must have been manufactured and sold in great quantities because we get this question probably more than any other.

7 thoughts on “Goldfield Hotel – Luxury in the Nevada Desert”