Named for Colfax County, Colfax, New Mexico got its start in early 1908 when the New Mexico Sales Company, developers for the St. Louis, Rocky Mountain, and Pacific Railroad, thought a profit could be made in developing the land located west of the Vermejo River. Heavily advertising the area as “on two railroads, near mountains, rich with game, and close to other towns,” their plan should have been a success, but it wasn’t.

Located just 12 miles northeast of Cimarron and some six miles from the growing coal mining camp of Dawson, their aggressive promotional campaign, which included thousands of letters sent to potential prospects, focused on luring farmers to the area. Perhaps that was part of the problem, as today, no farms can be seen in the region that is dominated by ranch land and livestock.

However, the promoters did have some initial success and by 1908, a post office was opened and soon the small community boasted a combination school-church, a gas station, a general merchandise store, and the Dickman Hotel (later known as the Colfax Hotel.) 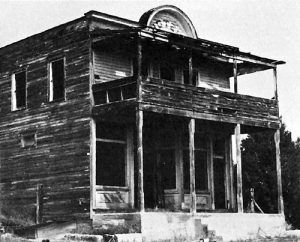 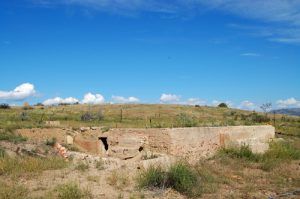 All that’s left of the Colfax Hotel today is the foundation, by Kathy Weiser-Alexander.

The town never flourished as promoters had hoped and by 1921, the post office closed. Other businesses and people remained in the area until the Great Depression, when high gasoline prices forced most people to give up driving and the vast majority moved to the nearby towns of Dawson, Raton, Springer, and Cimarron. However, the school remained open until 1939. Today, there is nothing left of the old settlement but ruins, hulking foundations, and tumbled boxcars.

Located just off the highway, I remember visiting this place as a child, when the hotel was still standing and even then, thinking, “Oh, my gosh, someone’s going to steal that hotel sign.” Though what’s left of the old town today is behind a fence, its close proximity to the highway, no doubt, led to much of the fate of Colfax over the years.

The old townsite is located about 11 miles northeast of Cimarron, New Mexico on Highway 64. 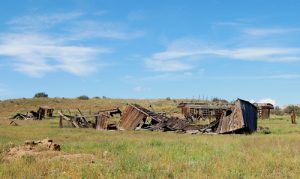 Obviously, the town wasn’t prosperous as it appears that several residents lived in old boxcars, by Kathy Weiser-Alexander.