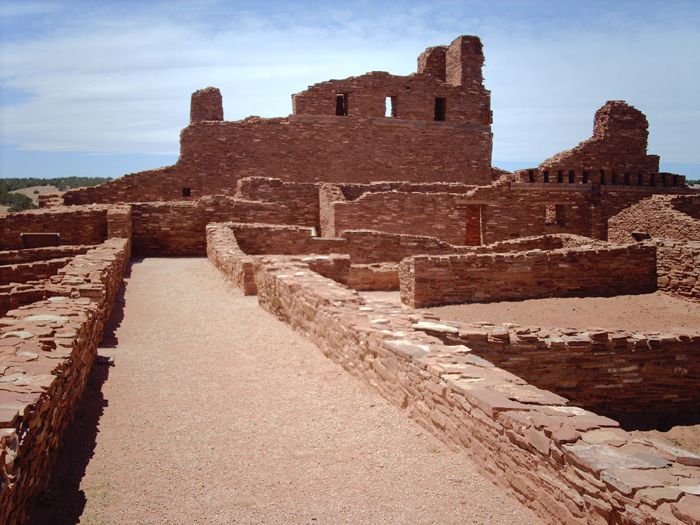 The Salinas Valley in present-day New Mexico was occupied as early as the 10th century, first by Mogollon then Anasazi cultures, who established major trade centers that served both the Rio Grande villages and the Plains Indian tribes. Franciscan missionaries built mission complexes at each of the three Salinas pueblos. One of those three, Abó, has extensive unexcavated pueblo ruins built about 1300 A.D., and red sandstone ruins of the mission and monastery of San Gregorio de Abó.

Covering about 370 acres, the number and size of the unexcavated pueblo mounds at Abó suggest that by the time the Spanish arrived in 1581 they would have found a thriving community here, which led them to establish the mission in 1622. Construction of a small Church and Convento were complete by 1628. It would later be renovated between 1640 and 1658.

Severe drought, Apache raids, and an epidemic forced the abandonment of the pueblos in the early 1670s, and for over a century it sat uninhabited. In 1815, Spanish sheepherders tried to re-occupy the area but were forced out by Apache in 1830. It wouldn’t be until 1865 that settlers would permanently return. 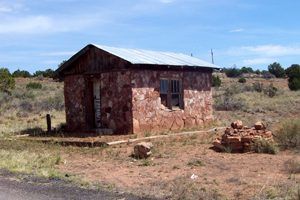 In 1912 the railroad arrived and the settlement next to the ruins was officially established as a town. During its peak, Abó, New Mexico had a school, two saloons, a post office, and a Catholic church.  It would last only briefly though, and by 1940 the railroad retired its depot. In 1960 the school closed, and today only the original pueblo ruins, along with other scattered remnants of buildings remain among area ranches.

The pueblo ruins were recognized as a state monument in 1939 and were declared a National Historic Landmark in 1962. They continue to be preserved as part of the Salinas Pueblo Missions National Monument. 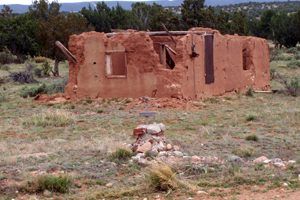 Abó is located six miles southwest of Mountainair, New Mexico, on U.S. Highway 60. Mountainair is dubbed the Gateway to Ancient Cities, with the pueblo ruins of Quarai and Gran Quivira also nearby.

The Salinas Pueblo Missions National Monument is administered by the National Park Service. The Visitors Center is in Mountainair, New Mexico, one block west of the junction of US 60 and NM 55. Self-guided tours are available. 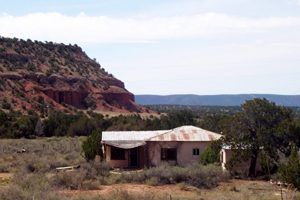 A home sits abandoned at Abo, New Mexico against the backdrop of the Salinas Valley by Jay Warner.